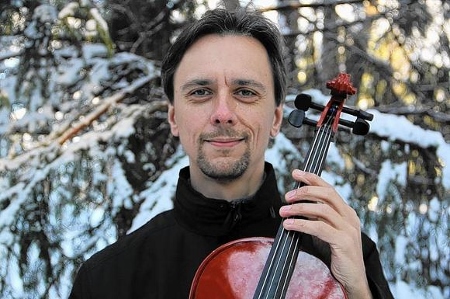 On Oct. 5, McDaniel was delighted by the musical talents of Maxim Kozlov, cello, and David Kreider, piano in the European Musical Alliance concert held in the Forum. This event was part of a series of concerts sponsored by the McDaniel College Department of Music and The Evelyn Mackenzie Performance Series.

Kozlov, an internationally renowned cellist, has performed as a soloist and the Principal Cellist with the Chamber Orchestra “Kremlin” , an orchestra based in Moscow, Russia. He also served as the Principal Cellist for the South Dakota Symphony Orchestra. Most recently, he participated in several music recitals and master classes in the Dakota Sky International Piano Festival with pianists Adam Golka, Paul Sanchez, and Alessio Bax.

Kreider is a graduate of the Peabody Conservatory of Music. After receiving his Master of Music, he was awarded a Fulbright Scholarship to travel to Vienna, where he studied piano with Hans Kann and Hans Graf. Kreider is the founder and Artistic Director of Chamber Music on the Hill, and has been a frequent performer on the concert series since its inception in 1990.

The opinions of the audience were generally positive. Many members of the McDaniel community as well as the Westminster community attended the concert.

John Corona, a visitor from town, says, “This is my first time at McDaniel College, and so far I am having a good impression of it. It is a privilege to have this quality of music and musicians so close by to home. The musicians are excellent and the selection of music is unique. I must say, however, that the thing I like the most about this concert is the intimacy between the audience and the musicians.”

Margaret Boudreaux, Choir Director at McDaniel, remarks that “It is fabulous to have such expressive performers who are capable of bringing out the soul of the music to the audience.”

Sophomore Grier Freedman says, “It is awesome! It is a lot of fun getting to watch Dr. Kreider play the piano.”

Upcoming musical events on the Hill include:

-Chamber Music on the Hill presents Laura Strickling and Liza Stepanova on Nov. 2 at 7 p.m. in the Forum.

Writer of the Week: Chinua Achebe