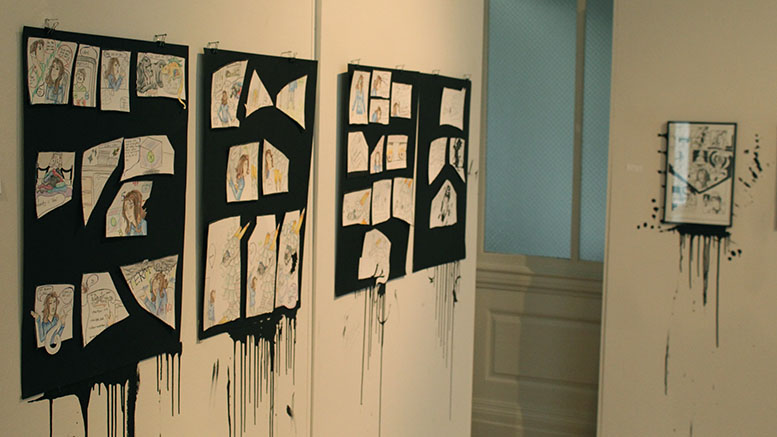 On March 1, the McDaniel College Art Department had a new opening in the Rice Gallery. This exhibit, called Pigments and Plastics featured three seniors with departmental honors in their major. The artists, Monique Staveley, Caitlin Eversmier, and Rachel Wojnar, all displayed several pieces that they had put together for their honors exhibit.

The pieces ranged from comics to plastic bags to a crown made out of cicadas. The overarching theme of this exhibit was a reflection on self, nature and the environment.

Staveley’s pieces featured comics that she had created. She discussed how she grew up loving stories, and thought that pictures and words work well together to create a better and more in-depth story. The comics she displayed in the Pigments and Plastics exhibit featured stories about the life struggles of a college student, whether it be relationships or term papers.

Where Stavely focused more on the Pigments side of the exhibit, Eversmier and Wojnar focused more on Plastics. Eversmier, an Environmental Science and Art double major, explained how taking care of the Environment and particularly the oceans has always been near and dear to her heart. As a scuba diver for most of her life, Eversmier described the environmental degradation that she has witnessed firsthand caused by plastics in the ocean. In order to demonstrate this problem in her pieces, she had several prints displaying ocean animals with plastic stitched to them. Additionally, she had many posters demonstrating and discussing much of the pervasive nature of plastics and microplastics in our oceans.

Perhaps the most eye-catching of her exhibits was a giant outline of the state of Texas made entirely out of plastic grocery bags. The purpose of this exhibit was to demonstrate the enormous nature of the plastic pollution in our oceans today. In order to combat this problem, Eversmier suggested that people begin grocery shopping with reusable bags and avoiding the use of plastic straws.

Lastly, Rachel Wojnar’s pieces also focused on nature and how it is tied into art. She explained how she has become increasingly concerned and attentive to environmental problems and how they can affect our lives. One of her works, “450 years” featured a video of her using a naturally occurring preservative to make art. She discussed how some plastics can take up to 450 years to biodegrade. Finding these numbers appalling, Wojnar decided explored ways of making her art more eco-friendly. Interestingly, she discovered a style of art called eco-art which focuses on using nature to create beauty in an environmentally friendly way. One of her pieces that demonstrated this was called “hope for our waters,” and it featured a log that she had carved into the shape of a cluster of oyster mushrooms.

Overall, the Pigments and Plastics exhibit is both breathtaking and thought-provoking. Stop by if you get a chance. The exhibit will be up through March 30 for visitation.

Is What You Wear Linked to How Others Perceive You?

Writer of the Week: Silvina Ocampo