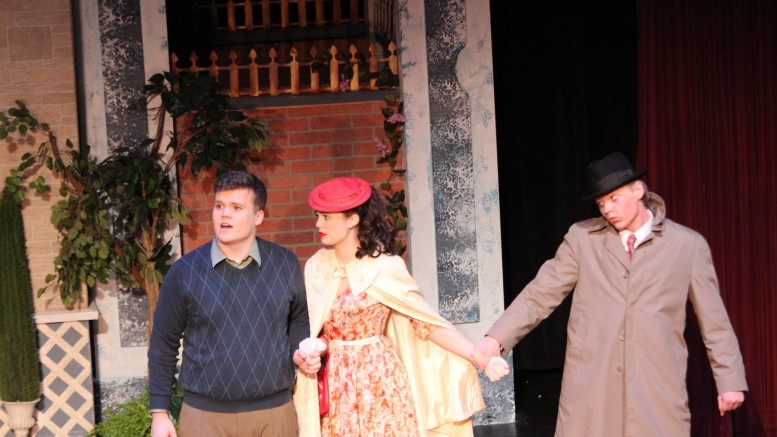 What happens when you take a French play written in 1662 by Moliere and set it in 1950s America? You get the McDaniel College Theater Department’s production of “The School for Wives.”

The different time period does not detract from the main plot of the show, but rather enforces the comedy as the villain of the play, Arnolphe (played by sophomore Bryan Bowen) tries to create the perfect wife by keeping his ward Agnes (played by sophomore Megan Smith) completely innocent and naive as she grows up. Arnolphe’s plans fall apart during the course of the show as the characters find themselves in one hilarious situation after the other, as Agnes turns out not to have completely embraced the ideals that her guardian wanted her to.

“When people today see imagery [from the 1950s], even just the clothing, it evokes a sense of women staying home and having the men earning money for the household.”

The audience was drawn into the story and were delighted as Arnolphe found himself making his situation worse and worse, as Agnes and her lover Horace continued to outwit him during the play. The play comes to a close as all characters come on stage and all secrets and schemes are revealed.

Sautter enjoys this particular play due to its creativity during the time constraint of being set during a 24 hour period, as plays written during this time period had to be.

“Every play had to be set in only 1 place and action had to believably take place over 24 hours. Intelligent artists can be creative while operating with strict rules.”

There was always something entertaining happening during the play, from the main characters misunderstanding one another and letting situations get out of control to the characters with no lines who appeared and enacted funny scenes on their own. “The School for Wives” was a comedic play that everyone can appreciate, though excepting perhaps the scheming misogynistic Arnolphe.