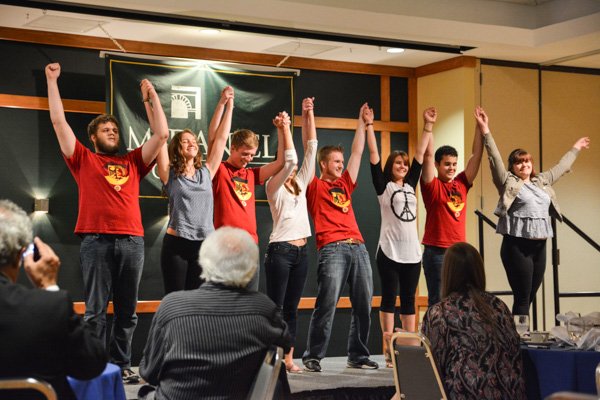 On Tuesday, April 26, at 6 p.m. students, faculty, and staff gathered in Decker Forum for McDaniel’s first-ever “Taste of Europe” hosted by the French Club and German Club.

As everyone arrived, guests were treated to refreshments and appetizers. Before long, senior Mariah Ligas of the German Club began the event. The first of many festivities included a performance by senior Clarissa Balint, who played “Tavaszi szél vizet áraszt” (The Spring Wind Blows the Water), a traditional Hungarian song. Having studied at McDaniel’s Budapest Campus, Balint was able to select the song and sing the Hungarian lyrics.

After this, attendees were invited to eat. The cuisine ranged from various European origins. Dishes included Spanish paella, Swedish potatoes and Italian bread and butter.

As guests finished their meals, Raissa Gryliski (director of the German House) and senior Tommy Milnes recited “The Little Red Riding Hood” from Grimm’s Fairy Tales in German, with subtitles and images projected behind them.

This was followed by a performance by Tim Eichelberger, who sang the national anthem of Scotland while displaying a kilt. After singing, he was accompanied by Milnes, who was also wearing a kilt. The two posed momentarily in their outfits for guests to take pictures.

Moving along, Ligas led a trivia game in which one table had the opportunity to win gift cards to JeannieBird Baking Company. The questions ranged from geography, linguistics, and several other topics. In the end, a table of professors technically won, but the award was given to a table of students.

Afterwards, Nicole Ringel took the stage to announce the winner of the IPO’s photo contest.

Calderon, Ligas, and Sabatano then gave a few special thanks: to JeannieBird for donating gift cards, to Kelly Harvey of OSE for helping organize the event, to Sodexo for helping make the event a reality, and to the department of world languages, literatures, and cultures for also helping.

A Week of Allies