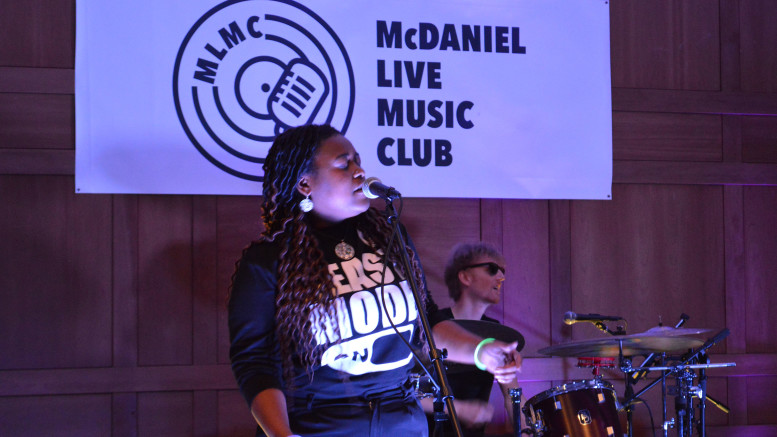 On Nov. 15, McDaniel Live Music Club hosted their second concert of the semester. This concert, titled Gnarly November, brought in two bands for the McDaniel community to appreciate.

The first band to perform was Oh He Dead, a D.C. based group with lots of energy. The band was chosen through a poll put out by the Live Music Club over the summer. They previewed samples of different bands on their Instagram story, and had students express their interest in each band. Oh He Dead was the most popular of the group, so they were invited to perform.

Oh He Dead planned to release their first album on Nov. 22, but were happy to sell early copies to McDaniel students.

The second band to perform was Super City. This Baltimore band was familiar to the club, as they performed at their first on-campus concert last fall. Super City also hosted a music workshop in Levine Hall the afternoon before the concert.

Planning for this event first began over the summer by creating an Instagram page for the club in order to get student feedback about what they would like to see. After conducting polls to determine which bands to bring in, the club contacted the bands and their managers, and arranged a time that would work well for them.

One of the biggest challenges was finding a space large enough to hold the event, especially due to the construction happening on campus, and making sure people were able to find the Forum once it was reserved. The club also worked on sourcing equipment and fundraising for the event.

“Partnership with OSE was really helpful in this process with making posters and helping us determine what we would need for this event,” said Jill Courtney, co-founder and co-president of the club.

The event was quite successful, and there were about 85 people in attendance. This included students, alumni, community members, and friends.

“I really enjoyed the concert! Oh He Dead was my favorite act,” said McDaniel senior Lauren Beckjord. “I usually consider live music to be a luxury or rare event, so having it on campus really made my day.”

Both Oh He Dead and Super City will be performing with a third band, Safer, at 9 p.m. on Dec. 7 at the Ottobar in Baltimore.

Live Music Club hopes to continue hosting concerts on campus in the spring. They plan to have live music at Spring Fling again this year, and to hold another outdoor concert in Red Square.

“We really want to continue to bring diverse music to campus that students might not otherwise ever get the chance to hear in person,” said Micaela Champion, the secretary for Live Music Club.

Courtney agreed, and stated that they hope to have “more concerts and bigger crowds!”.

The club is grateful for the support that they have received from the McDaniel community.

“Our club truly started just last year. People didn’t know what MLMC meant, they did not realize what kind of concerts we wanted to bring to campus, and just didn’t understand what our vision was. Now we have the support of many faculty and staff members, students, Westminster community members, and the bands we have invited to campus,” said Champion. “With this support, people now know what MLMC stands for and you can even find an abundance of our stickers on water bottles and laptops around campus. Gnarly November would not have been as successful as it was without this support.”