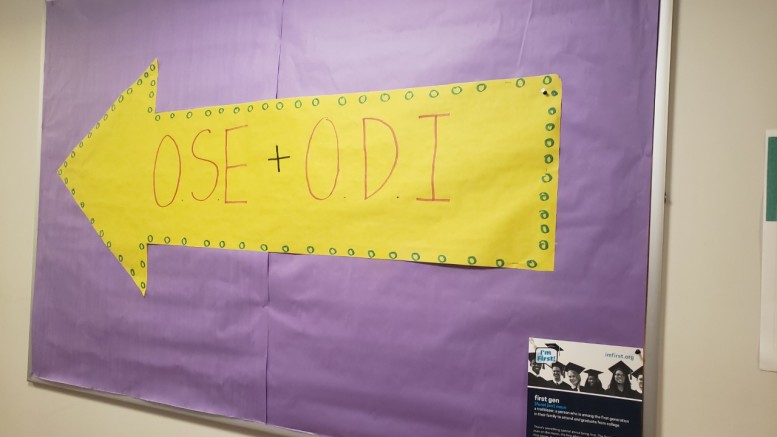 During the past five years, McDaniel College has increased their minority population a great bit. This year, the College has admitted more minority students than in any past enrollments. This year’s first-year class was 50 percent students of color, and had the greatest number of students being admitted in the history of the school with almost 600. With this class, along with the number of minority students enrolled in prior years, the minority rate at McDaniel College is at a record high. But the real question is: what is McDaniel doing to make the experience a good one for these students at a college that is still predominantly white?

McDaniel College has over 90 organizations and only a select few cater to the minority students on campus such as Curlfriends, Black Student Union (BSU), Students of Caribbean Ancestry (SCA), Africa’s Legacy, Asian Community Coalition (ACC), and Hispano-Latinx Alliance (HLA). Even though these organizations are inclusive of every race, they mostly support minority students and the issues that they face. They are also student run, so the students who are a part of these organizations and run them know what the general body of the club goes through.

HLA, ACC, and Africa’s Legacy host dinners once a semester to share the culture of those clubs. In BSU, students put together different gatherings that support the black community. During meetings, they talk about black issues in America and get the input of students and how they feel about the news at hand. In these organizations, they try to get the input of the students and their thoughts so they can feel as though they have a voice. Other organizations help students feel comfortable with their heritage and show the campus community the beauty of the different heritages so everyone can appreciate it.

Other ways minorities, more so African Americans, can be involved in the McDaniel community is through Greek life. Some students take Greek life very seriously, especially in the black community, and take part in sororities and fraternities that are a part of the Divine Nine; the campus has four of those nine. They collaborate with the organizations that are for the minority students, or they may have events for the whole student body, but only the minorities will appear to support the event. There was a case like this during Homecoming, but it was not for Greek life. Student Government Association, which is mainly run by minority students, had a pep rally for the school to kick off the Homecoming weekend, and it seemed to be only minority students that showed up.

All student organizations are registered through the Office of Student Engagement (OSE), which also works closely with the Office of Diversity and Inclusion (ODI).

According to their mission statement, “ODI offers programs and provides guidance, both academic and nonacademic, to underrepresented students; provides support and coordinates student groups to serve the needs of diverse student populations; develops programs and services to promote diversity awareness and understanding within the larger campus community; and serves as a resource to students, faculty and staff, in their efforts to promote diversity and inclusion. The goals of the ODI are to promote identity development, support authentic dialogue and engagement about and across difference, and build an inclusive community.”

However, outside of these offices, student-run organizations, and Greek life, McDaniel College as a whole does not do enough to accommodate the minorities on campus.

With McDaniel wanting to raise their diversity rate, I feel that they need to make a better effort for the minority students, so that they can have a better college experience at a predominantly white institution (PWI). Yes, they do have the aforementioned organizations (for instance, Curlfriends will be having a panel in February to talk about how it feels to be a black student at a PWI), but that is not enough. Other McDaniel offices should work more closely with ODI to extend the reach of the inclusive programs this office provides.

There are many ways the school as a whole can do a better job to make the minority students feel that they are meant to be a part of the community and that they feel special, especially those who have come from high schools that would go above and beyond.

Mikayla Lee, a current junior here at McDaniel, said that during Black History Month in her high school, “they did announcements every morning and we decorated all the hallways for different civil rights events like Selma and the Harlem Renaissance and stuff like that.”

While I was in high school and middle school, they would celebrate different cultures and had events where they would cook different food, but the only difference is that the whole school would participate, not just the people hosting the event.

Jonathan Jacobs, a current sophomore at McDaniel College, stated that in order to make it a comfortable place for McDaniel minority students, “There needs to be more diverse faculty. I would feel more comfortable if I saw more faculty that look like me, and I believe that would go for any minority student.”

The College could do something like put different facts on the main McDaniel page and different social media pages about the different ethnic groups on campus. They could also have a time in Englar Dining Hall where they have different sections with different parts of the world sharing their food. There could even be set days where Glar provides a diverse spread of ethnic food.

McDaniel does have a lot of organizations that can help minority students feel welcome and appreciated when it comes to being on this campus and ODI works hard to promote diversity, but that is only a little part when students are living on campus for seven days a week and about ten months out of the year. These students are already in a different area than where they grew up and the school environment is different from the ones that they have been a part of.

If McDaniel gave these students the opportunity to voice how they feel and then listened and made changes, not only would the students have a good experience and enjoy being on this campus, they would also recommend it to potential students to come join the McDaniel community. Most importantly, these students would care more about the campus because they would feel like they are included.