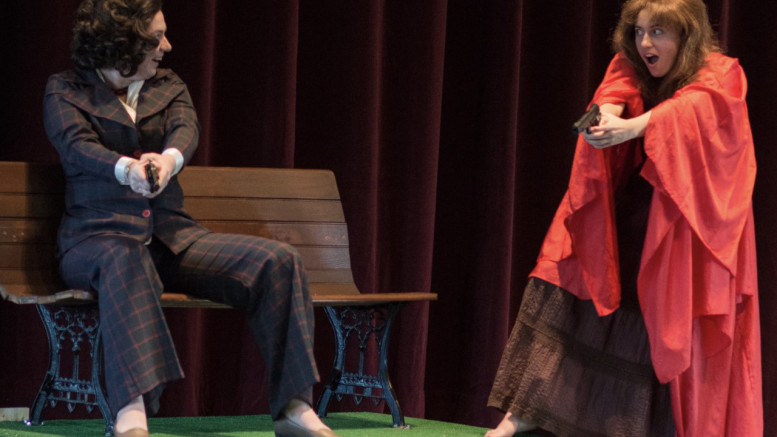 On Nov. 20, McDaniel College Theatre debuted their production of “Assassins,” which ran through Nov. 23. “Assassins” features music and lyrics by Stephen Sondheim and book by John Weidman. It is based on an idea by Charles Gilbert, Jr.

“I was trying to find a piece that fit with our current students and spoke to issues that I believe are important,” van den Berg said. “Gun violence has escalated exponentially in our country, and often it’s people very much like this bunch that carry it out.”

The story follows the nine men and women who attempted (and in four cases succeeded) to assassinate U.S. presidents throughout the years.

“It is not a linear plot, more like a series of vignettes, presented review style, offering glimpses into these characters and the events that ultimately shaped America,” said van den Berg.

A director’s note was added to the program, warning audience members about the non-firing weapons used during the production and shedding a light on the gun violence that repeatedly “breaks” our nation.

“I wanted the audience to have a sense of this work before seeing the play, if possible, so the director’s note is an edited version of that concept statement,” said van den Berg.

According to van den Berg, audience turn out was as expected and she is delighted with how everyone performed.

“Like any rehearsal process, it’s had its ups and downs, but ultimately I’m pleased with the end result, and very proud of all the students involved, both backstage and onstage,” said van den Berg.

Writer of the Week: Chinua Achebe