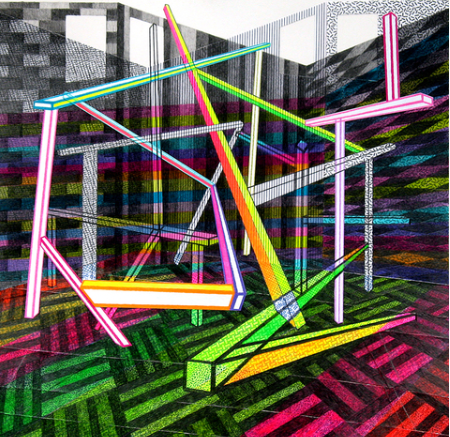 During her lecture, as she described her artistic journey, although she quickly denounced a some of her work as terrible, oftentimes before she even showed the piece itself. As Nikki herself said, sometimes you have to make terrible stuff to make great stuff, to learn.”

Despite her self-deprecation, much of her work was actually quite pleasing. Painter loves to play with spatial relationships and wants to reclaim the idea of ‘negative space’ as an actual choice in art rather than a burden of consequence. The multiple layers within her work creates a sense of busyness and cause the viewer to look everywhere, taking in the line-based work with its hard edges.

In the beginning, most of the layers in her works came from images she took from artists’ magazines. Bothered by this lack of originality, Painter stated, “something about the work doesn’t really feel like mine.”

Thus, she eventually began to look at spaces around her instead, such as construction sites, something in which she still finds inspiration today. However, Painter said that she still felt like she was stealing. She questioned whether or not she should start making the destruction herself rather than take it from life around her.

Painter is on a quest for originality, something she can distinctly call her own. Despite heavy influences from artists Judy Fath and Jessica Stockpor, Nikki remains determined to create her own original work. Her lecture brought forth an interesting question to her listeners: Where exactly is the line between inspiration and originality?

Nikki’s work can be viewed at nikkipainter.com.

10 local Maryland/Virginia bands (and albums) you should listen to