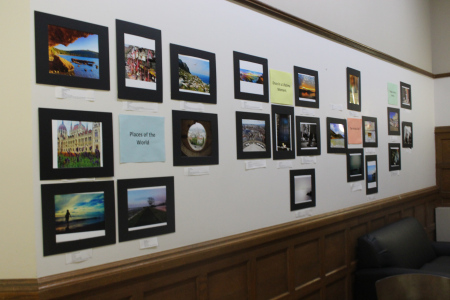 The International Programs Office (IPO) is held its first annual campus-wide photo contest this year in order to advertise for their office and give students an opportunity to live vicariously through their classmates.

Silvia Upton, the study abroad advisor and woman in charge of the contest this year, said, “We were also looking into ways for students who already went abroad to share their experience with a broader campus community and not just the study abroad office.”

Eight students submitted photos to the contest, which were due on March 23 and had to be from time spent abroad. It is a good turnout considering that in 2014, 75 students studied abroad throughout the year in semester, Jan term, and summer programs.

There were six categories participants could submit pictures in, but only four received submissions and can be voted on: People of the World, Places of the World, Once in a Lifetime Moment, and The Artistic Eye.

The photos have a title and description and list the semester and location of the image taken. They are posted on the IPO Facebook page and hung on the wall in the Hill Hall Lounge.

Facebook and the Hill lounge are also the two places students and faculty could vote. However, there were students that did not know about the contest and did not go to Hill Hall and stumble upon the images.

“I had no idea this was happening,” said Paola Villegas, a McDaniel senior biology major, when shown the images. “They should put it somewhere more visible so more students can see it.”

Despite that, Villegas supports the contest: “It’s amazing. I’ve never been to any of these places, but you get a glimpse through the photos. I definitely think they should do it again.”

The contest is part of a larger plan to advertise for study abroad and increase interest, especially in majors that are underrepresented. 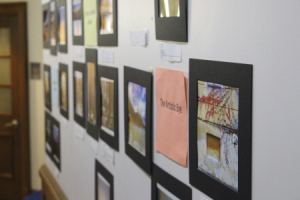 To advertise, the IPO has also been putting up themed posters every month, including a month focused on Budapest and another on fun facts about study abroad, such as “Did you know you can study in Bhutan?”

They want students to know that they can study more than languages abroad and do not have to speak the language of the country to go to many places.

Heather Sinclair, one of the participants in the contest and the winner of the “Once in a Lifetime Moment” Category, believes it’s important to study abroad in order to broaden understanding of the world. She always wanted to go abroad during college and is glad she was ultimately able to see Greece, where she took her photos, in person.

She said that she’s learned that “no matter where you go, smiling is the universal sign for happiness.”

When asked her favorite part of the process, Upton said, “Seeing the pictures, because a lot of these photos are amazing. I live a little bit vicariously through seeing these pictures, imagining being in those places.”

The photo contest concluded on April 30, when winners were announced at the IPO’s end of the year reception from 4-6 p.m. in the Hill Hall Lounge.

Writer of the Week: Robert Jordan