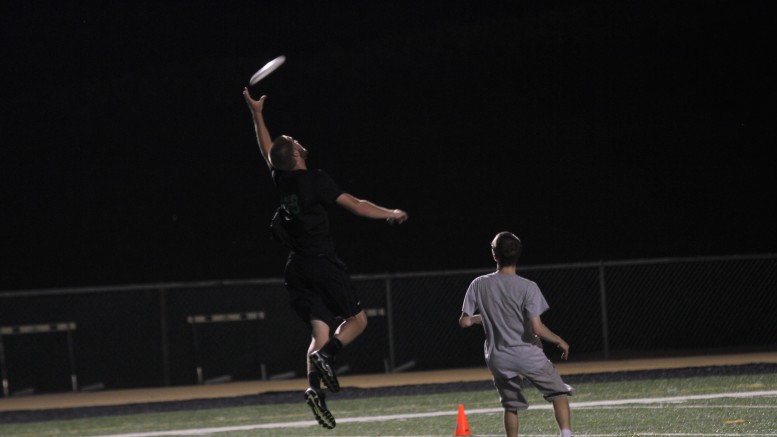 It’s ten o’clock at night and members of McDaniel’s ultimate frisbee team are down on the turf getting their game on with hard sprints, cuts, and passes both short and deep. Effort is everything in the sport commonly referred to as “ultimate.”

In recent years, McDaniel College’s Green Terror Ultimate team has taken root and found its position as a student organization on campus.

While ultimate is not as widely known as popular sports in the United States such as football and baseball, many would argue it has the potential to be.

A sport of fast-paced cuts, onslaughts of deep and short passes, with competitive play and great times, members of any ultimate team have a sort of compassion for the sport they play and show it through their effort and ambition.

You don’t need to be the best of the best to go out and perform on the ultimate team. Members of McDaniel’s team enjoy the time for fun, friends, competition and exercise.

“We’ve grown immensely,” said current president Atticus Rice. “When I joined the team as a first-year we were fairly sizable, but almost all seniors. During my sophomore year and on, we grew in numbers and have had a fairly consistent team with even representation across the classes.”

Rice is hopeful for McDaniel’s ultimate team and wants to get more people involved.

Due to a lack of funding, however, the team doesn’t have an adequate ability to travel and play other teams. Currently, they make do in the form of carpooling to play other colleges.

Rice also mentioned the hope for opening an after-school program with the Boys and Girl’s Club or a local middle school, giving the members of the organization an opportunity to do a bit of community outreach.

Because the organization isn’t a sanctioned college sport, there aren’t any requirements to be a member, giving the students the ability to come and go as they please. That said, many students have found their niche in McDaniel’s Frisbee team.

“It’s something that I enjoy,” said senior Joseph Ferguson who has been playing for four years. “It helps me de-stress. I enjoy playing it and I enjoy being around these people.”

Ferguson is hopeful that the organization grows in years to come and produces better turnouts at practices.

Editor’s note: Atticus Rice is both on the editorial staff of this paper and the Executive Board of Green Terror Ultimate. No favoritism was given to this article in its production or distribution.