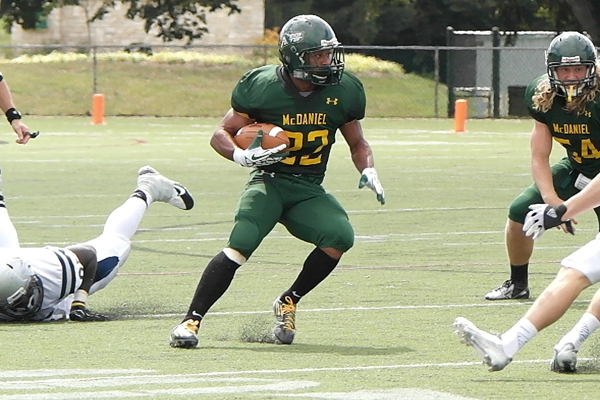 Saturday, Sept. 14, 2013 marked a significant day for the McDaniel College football program. They hosted Moravian College and won 21-14, their first win since the 2011 season, when they went 2-8 overall. This also ended a 13-game losing streak for the team and is the first win for head coach Mike Hoyt.

Running back senior Joe Rollins scored all three touchdowns for the Green Terror, all of which came in the first half.  His first score came just over a minute into the game, when he ran 44 yards down the sideline for a touchdown. During the next Terror possession, Rollins ran for 10 yards, followed by a few pass plays which set up a 21-yard touchdown run from the senior a little over halfway through the first quarter. Just after the start of the second quarter, Rollins ran for his third score of the game, increasing the Terror’s lead to 21 points.  That would be all for the McDaniel offense for the rest of the game.  The defense gave up one touchdown each in both the 3rd and 4th quarters, making the score 21-14.  With less than 20 seconds left in the game, Mike Cousar intercepted a pass from Moravian quarterback Robbie Moyer, allowing the Terror to celebrate their victory a little early.

Coach Hoyt said that it feels good to get a win and it shows that “the hard work and dedication paid off.”  He also said in regards to the upcoming game, “Muhlenberg has been one of the best teams in the conference, and the game will be like a measuring stick for us to see where we stand in the conference.”

The team will hit the road for the first time this season on Saturday the 21st as they travel to Muhlenberg College to face the Mules in a Centennial Conference match-up.