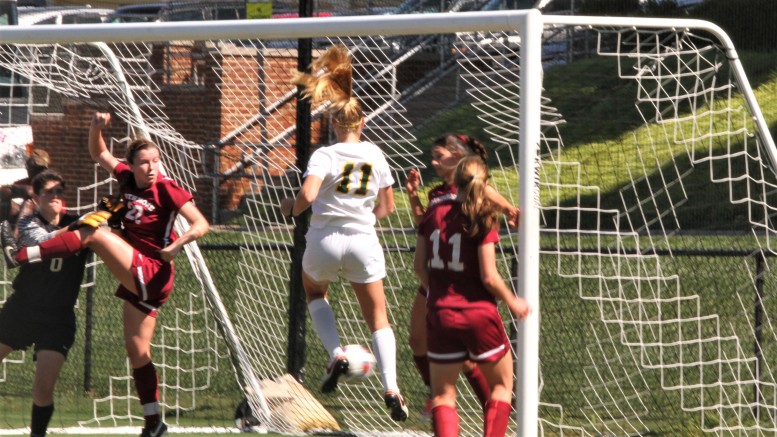 McDaniel's Marissa Funke finishes a corner from Abby Keen during the Green Terror's 4-3 win over Swarthmore on Sept. 23. Photo by Atticus Rice.

In a battle of the best, women’s soccer defeated No. 6 Swarthmore Saturday out of Westminster, 4-3, to rise to an unchallenged first place in the Centennial Conference.

Katie Kirschenmann scored the go-ahead goal for McDaniel (7-1, 3-0) in the 67th minute thanks to a Kristen Upton assist, the fourth and final goal for the hosts on the day.

“We’ve worked hard and we deserve to be recognized with games like this,” said head coach Sandy Lagana following the win.

The Green Terror opened up the day’s scoring with an unassisted goal from Maddie Schwartz, the freshman’s second scoring play in as many games.

Defender Marissa Funke, days off of scoring her first collegiate goal, padded the host’s lead with a finishing touch on an Abby Keen corner in the 18th minute.

“That’s something that we’ve done at least as long as Kristen Upton has been here,” said Lagana, “and now that Marissa [Funke] has shown that she can do it too we’ve been scoring two corner kicks a game now and it’s really hard to beat a team that does that.”

Swarthmore (8-1, 2-1) cut the McDaniel lead in half when Hannah Lichtenstein found the back of the net at the 29:46 mark, unassisted.

Lichtenstein pushed across her second goal of the day to start off the second half scoring after McDaniel’s Kristen Worry closed out the first half with her second goal in as many games.

“The mindset was that we were gonna play our best and give ourselves the best chance to win,” said Lagana.

The Garnet’s Marin McCoy closed out the game’s scoring with an 82nd minute unassisted goal to draw the visitors within one point.

“They changed their formation which kind of changed things for us and then we sorted that out and I thought that the rest of the game was a fight,” said Lagana. “We knew that going into today was just going to be a battle. It’s good against good and who’s going to want it a little bit more and I think it was our girls today.”

Despite the loss, the Garnet outshot McDaniel 14-11, holding the Terror to just three shots in the second half. Both contenders drew an even five corner kicks.

McDaniel has only improved with the season, posting an undefeated 7-0 record since their season-opening loss to top-ranked William Smith.

“I don’t think there’s something I’m not seeing,” said Lagana, “it’s just a matter of I want to see them get better every day.”

The Terror take a break from conference play as they travel to Goucher (3-3-2) Tuesday. Game time is set for 7 p.m. out of Towson.

“They’re a good team,” said Lagana. “They’re obviously not Swarthmore so if we approach them like they’re not the best then we could lose that game. I think right now we enjoy today.”

“I think we’re getting more consistent, keeping the ball better. We’re handling adversity, but everyday I’ll find something that we need to work on and we’ll keep on working on it,” said Lagana.