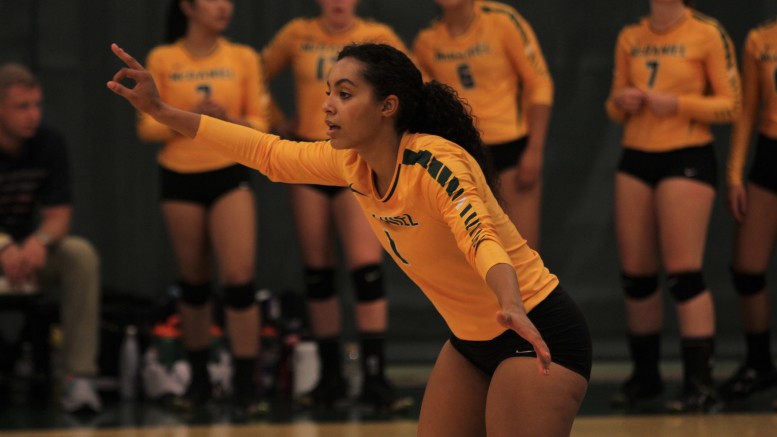 McDaniel (10-1, 1-0) extended their win streak to ten games with the win and propelled themselves to second place in the Centennial Conference standings.

Heading into the game with Gettysburg (12-1, 0-1), the Green Terror were mentally and physically prepared for the stakes that come with conference competition.

“We were all ready and excited to get our season off to a start and win at home,” Marlowe Embry said. “We were ready. That was our mindset.”

The team’s preparation was reflected in their play starting off strong winning the first and second set 25-22 and 25-10, respectively. The Green Terror fell 25-12 to the Bullets in a back-and-forth third set, but quickly bounced back returning fire against Gettysburg in a 25-19 fourth set.

The third set loss inspired McDaniel to return to their basics.

“[We] had forgotten to remember the fundamentals,” head coach Jessica Wolverton said. “We had forgotten all the work we had to do to win points. We [had] to remember our disciplines and that helped us find our groove again.”

Others, too, made their impact beyond the box score.

“[Lauren] Wells was fantastic,” Wolverton said. “When she was front row we could do awesome things.”

On the Gettysburg side of the net, attacks stemmed from a one-two punch between Allie Stranick and Stephanie Blair. Blair led the Bullets with 32 assists and Stranick capitalized on her well-placed sets with a leading 16 kills.

With Wednesday’s win, the Green Terror add to their momentum as they look to dethrone conference-leading Swarthmore (6-4, 1-0 ) next match.

McDaniel will host the Garnet on Sept. 23 at 1 p.m. out of Westminster.

Should College Athletes Get Paid to Play?