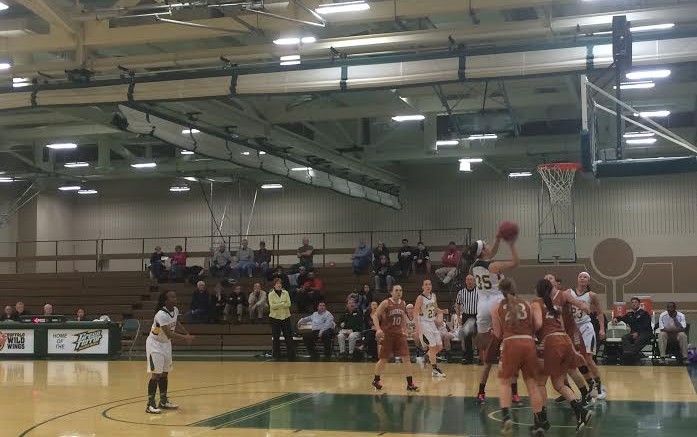 Karli Zeps sinks a layup in the fourth quarter of McDaniel's loss to Waynesburg.

No. 2 McDaniel was upset 78-73 by No. 7 Waynesburg in the opening round of the Women’s Basketball ECAC tournament on Wednesday night at the Gill Center.

Free throws from McDaniel’s Karli Zeps and Brittney Davis and Waynesburg’s Katie Gehlmann increased the score to 77-72 with 21 seconds to play. The final Terror score was a free throw from Sarah Bach with 15 seconds left in the game, and the final score was set in stone at 77-73.

Playing just a day after being awarded her second Centennial Conference Player of the Year title, senior Lindsey Nichols led the Terror in her final career game with 27 points, shooting 5-for-13 on 3s and 11-for-26 on field goals overall.

Junior Karli Zeps led the team in rebounds with 15, and 21 points on 8-for-15 field goal shooting.

Brittney Davis scored 11 and led the Terror with eight assists.

The Yellow Jackets were led by Heather Davis who shot 10-for-18 on field goals and 5-for-10 on 3s, scoring 28 points. Davis also led the team with eight rebounds.

Teammate Addy Knetzer added 16 of her own points, shooting 7-10 on field goals.

McDaniel outscored the Yellow Jackets 20-13 in the first quarter. The lead went back-and-forth after Knetzer scored the first basket of the game, a layup after the first 27 seconds.

Nichols responded with the first three McDaniel baskets, two of them 3s, giving the Terror an 8-6 lead.

By the time that Zeps and Jasmine Smith added on points of their own, it was 18-11 with three minutes left in the first.

Waynesburg’s Haley Delaney and McDaniel’s Melanie Yeomans each added on a layup before the quarter closed, ending the period with the Terror leading the Jackets 20-13.

The Jackets took control in the second, outscoring the Terror 22-14. McDaniel built their lead in the middle of the period, but key shots from Delaney and Monica Starre, the latter a buzzer-beater, sent the teams into the locker room with the Jackets up 35-34.

After a gridlocked third period with each team scoring 18, Waynesburg led 53-52 at the start of the fourth.

McDaniel got off to a solid start in the final period, with Davis, Zeps, and Smith scoring baskets, countering a spread from the Jackets, to put the score at 60-60 with seven minutes to play.

Halfway through the quarter, Nichols put up two successful 3, bringing her team within three at 70-67. Despite an onslaught of Terror free throws, the deficit was too much to overcome.

Waynesburg will move on to play Stevenson in the ECAC South Semifinals on Saturday.

A defensive team, McDaniel was able to force Waynesburg into 21 turnovers, compared to their 12. However the Jackets took the rebound margin, 41-37.

“We allowed them to play to their strengths instead of forcing them to play our game, said McDaniel head coach Becky Martin. “We’re not a running team, and we got caught up in that a bit.”

McDaniel finished their 2015-2016 campaign with a 21-7 record, finishing second in the Centennial Conference regular season standings and playoff tournament. Martin said that she is incredibly proud of the work that her entire team has done and is excited for the next season to begin.

McDaniel College will be moving forward with new athletic director

My Design expands in second year, looks toward future