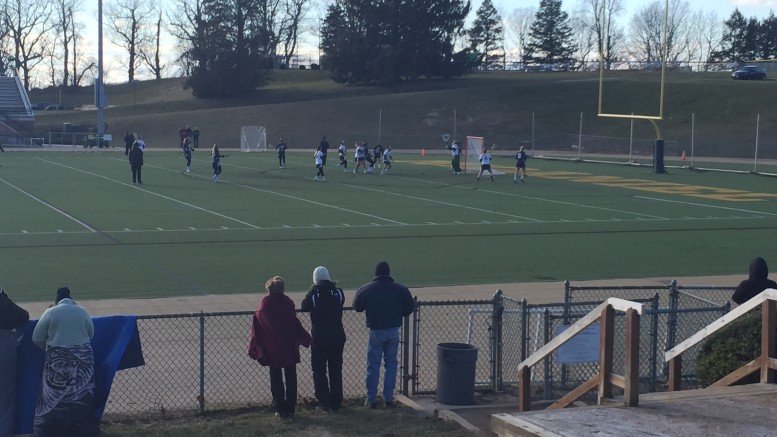 Bundled-up parents look on as McDaniel attempts to defend a St. Mary's (Md.) attack on goal.

Attacker Emily Brownawell started the game off strong for McDaniel, scoring within the first 50 seconds of the first half. Less than two minutes after her first goal, Brownawell scored her second goal of the game to push the Green Terror’s lead to 2-0.

The Seahawks exploded with four more unanswered goals before the end of the half, giving the Seahawks the 8-4 lead heading into halftime.

“We came hot and ready to go and ended the same way, but couldn’t make that connection in the middle which really hurt us today,” said McDaniel midfielder Abby Phillips. “Each game we’ve played we’ve come out on fire, but then we lull throughout the rest of the game. If we can fix that we can beat any team.”

“I’m looking forward to breaking the middle of the conference stigma we’ve had the past few years. We graduated some amazing players last year, but we also brought in some equally amazing freshmen,” she added. “I want us to make it further than we ever have before and leave next year’s teams something to strive for.”

The women’s lacrosse team is back in action this Saturday, March 5, at Shenandoah at 1 p.m.

The Importance of Intramural Sports

Get to know Jason Eichelberger: The new director of athletic communications

Intramurals Open Playing Field for All