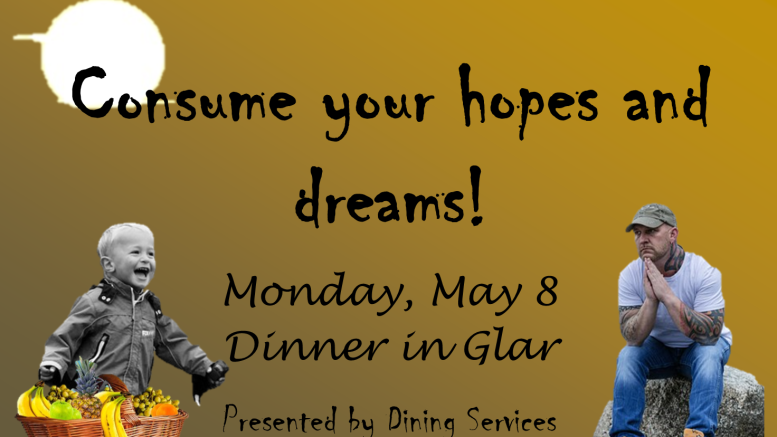 Student can enjoy a meal of their hopes and dreams on May 8 in Englar Dining Hall. Photo by Atticus Rice.

In an effort to offer a wider variety of their somewhat popular theme nights, Sodexo dining services has announced a lineup of new, never-before-offered theme nights to be featured in Englar Dining Hall later this spring.

On April 12, students will be able to take a venture off the fresh fruit Wednesday path and enjoy the dining hall’s new signature room temperature fruit spread instead.

April 17’s dinner period will feature a chef’s special that is said to satisfy all of the campus cannibals’ desires. “It should be a special kind of night,” said one of the Sodexo employees who asked to remain as anonymous as the workers cleaning the dishes.

Sodexo also plans to celebrate April 20 by offering a variety of marijuana-infused foods during the lunch and dinner periods. “I think our students who live in ANW will particularly like it,” the employee said.

In an attempt to appease the college’s vegetarian’s, Sodexo will take their faithless vow of Meatless Mondays one step further on April 24 in the form of Eat Less Monday. Students can expect to fight over the remaining morsels of leftover meals in the cushion cracks of select chairs throughout the dining hall.

The final theme night in Sodexo’s latest lineup will take place during dinner on May 8. Dining services have announced that students will be able to consume their hopes and dreams and kick off finals week with as little confidence as possible. If the night is as popular as imagined, the dining hall will consider offering hopes and dreams as a chef’s special during weeknights starting this fall.

Students with requests or suggestions for additional theme nights should contact dining services.