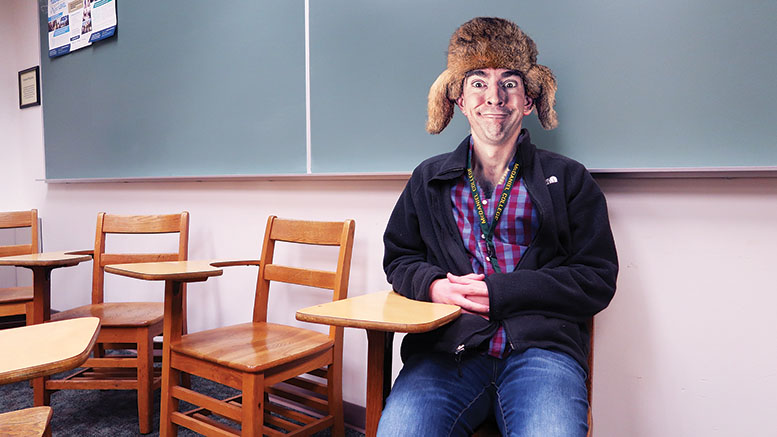 On Monday, freshman Mark Reynolds made the decision to sit at a different desk for his 9:10 Spanish class, shocking his 20 classmates.

This sudden move was precipitated after intense contemplation over spring break on the part of Reynolds, who had regretted his chosen desk by the third week in the semester.

“I sat across from the door,” explains Reynolds, who has his classroom in the basement of Hill Hall, “and that made getting up to leave in the middle of class pretty conspicuous.”

Reynolds moved to the side closest to the door, depriving junior Samantha Adams of her seat, who then had to sit at fellow junior Jane Trent’s desk, as the student was running late for class.

“He disrupted the entire balance of the room,” says a furious Trent, “I had to sit in the front and made eye contact with the professor. The whole situation was a mess.”

Other students who did not have to move were also disturbed by Reynold’s sudden change to the seating arrangement. One student, who wishes to remain anonymous because of the delicacy of the situation, explains that everyone was uncomfortable for the entire class.

“We weren’t sure what to do. The balance had been upset because Reynolds crossed that line. We had assumed that the seating was set because we were way past the second week when that is socially acceptable.”

Sophomore Kristin Baker, who normally sits next to Adams, was also affected by the change. “When we have to partner with people in class I always talk to Samantha, but because of Mark I had to actually talk to that creepy, greasy haired guy behind me that always talks to himself and comes to class in pajamas. Mark was so inconsiderate.”

At the time of the writing of this article, Reynolds is still unaware of the larger issues that his sudden move precipitated.

“I don’t think anyone even noticed,” he says, smiling confidently, unaware of his glaring classmates. “I might even sit closer to the door next time.”

“Most of the other freshman understand the seating system by now,” Adams asserts angrily, “Mark needs to understand the etiquette of classroom seating if he is going to have any social standing at McDaniel.”

Football Team Begins Fundraiser in Attempt to Start Fresh in 2014