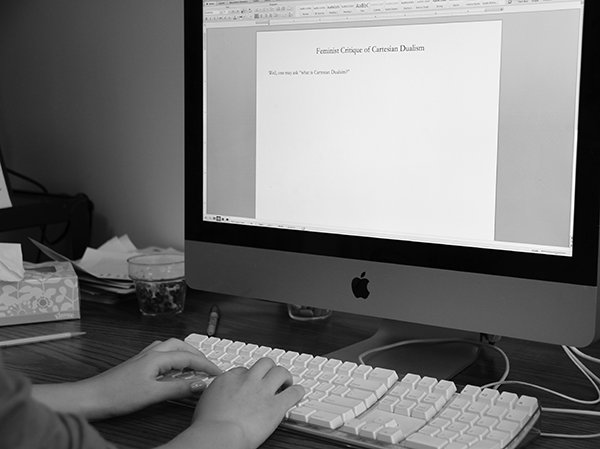 Having already spent a considerable amount of time checking various social media sights, beating his high score on Flappy Bird, and organizing his sock drawer, McDaniel junior Lloyd Durst recently came to the realization  that less than 15 minutes remain until his eight-page paper is due.

The paper in question, a feminist critique of Cartesian Dualism, was assigned by Professor Garp of the History Department in mid-March. Students were instructed to utilize the library’s online database network, to make an appointment with the Writing Center, or to stop by during the professor’s office hours in an effort to turn the completed and edited assignment on the date due.

“I don’t have time for all that,” Durst explained as he closed multiple browser tabs. “I’ve got work for other classes, club events, and have to go to the gym every day. Plus, I’m re-watching ‘LOST’ on Netflix. I can’t just quit in the middle of the fourth season!”

When asked, Durst assured reporters that he had “skimmed the reading.” “And besides,” he continued, “I can bang it out in ten minutes once I have a thesis.” With mere minutes to write this thesis, however, Durst’s roommate, Kevin Kevinski, is skeptical about the quality of the paper.

“I’m skeptical about the quality of the paper, honestly. I just don’t see how he can fill eight pages, even if he does make all of the periods 14-point font,” Kevinski explained.

Lloyd Durst dismissed his roommate’s uncertainty with a shrug of the shoulders and blamed the lack of technological accessibility for his lack of motivation. “Why can’t I just turn it in on Blackboard? My professor expects us to pay for printing and take the paper to her office.”

McDaniel Mascot to Change to Better Embody Concept of “Terror”