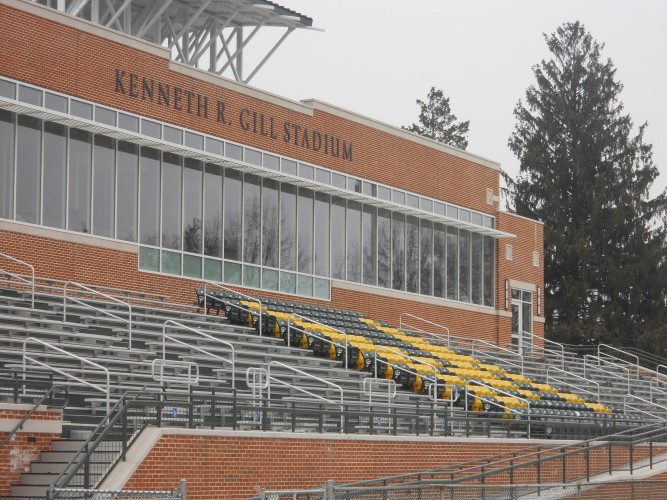 After an in-depth analysis of the past few college football seasons, the source of McDaniel College’s unfortunate losses has finally been traced back to the lack of fans attending the games.

Despite the slightly less uncomfortable seating of the brand new Kenneth R. Gill Stadium, a low audience attendance rate continued and so did the losses. This year consisted of only 2 wins against 8 losses, which is significantly better than last year’s continuous losing streak. The fault cannot be found on the field, but on the bleachers.

“The most common complaint heard around the athletic department is the lack of school spirit,” said Coach Guy, “The real problem our team faces is not a shortage of talent but a shortage of student support.”

Clearly, the disappointing career of the Green Terror football team boils down to the quiet stands and bored cheerleaders. Without the sound of repetitive inspirational chants and stomping, how can a football team be expected to play well?

Wide Receiver Tommy Lineman complained, “It’s just rude of people to not come and support their school’s team. If we’ve got no audience, we’ve got no drive or reason to win.”

Other players explained that the silence allows for too much thought, which drowns out the natural ability of the team. Sometimes it’s so silent, they can literally hear themselves think. They can’t focus on plays when their thoughts are on Plato.

“I can’t afford to be thinking during a game. I just need to be focused on the ball and it’s pretty hard to do that when there’s no noise,” said Chuck Downfield.

In order to stir up some motivation for the team, the athletics department will be starting to implement temporary measures next season including the use of cardboard cutouts in the stands and sound clips of wild cheers. Neighboring colleges have agreed to lend some of their cheerleaders to assist in boosting morale at games.

At a staff meeting, college administrators tried to come up with more ways to rally the student population into showing their school spirit. Some of the potential options include making attendance mandatory or offering gym class credits to those who attend.

So why is it more likely these days for the average students to disregard the hierarchical obligations to football players that have been in place since high school? According to Linda T. Nager, a sociologist who consults with teen gossip magazines, it may be a side-effect of a nation-wide cultural shift of popularity from jocks to geeks. Now that nerdy is the new sexy, the young adult crowds have moved from cheering on athletes to checking out the Chess Club.