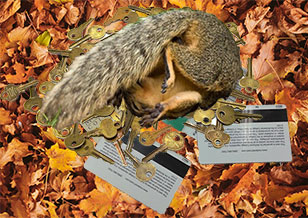 Have you lost your key or ID? Did it just disappear, seemingly from under your nose?

Maintenance worker Filmore Sweepson, known to friends as Filly, discovered the reason why.

“I was on the golf course by Harveystone and found a squirrel’s nest by a stump,” Sweepson said. “I was surprised, since the nests are usually in the fork of a tree. Then I looked inside, and I knew something a lot weirder was going on.”

Inside the nest, a single squirrel was curled up, sleeping…atop a pile of keys and IDs.

“I named him Squaug,” Sweepson said. “My daughter really likes The Hobbit.”

Sweepson and another worker, Maximilian Waterstone, decided to rescue the contraband from Squaug. The squirrel, however, had another trick up its sleeve.

“I was asleep for hours,” Sweepson added. “It was dark by the time I woke up. W thought we’d try the next day.”

The Good News: Squaug was gone and can no longer terrorize campus.

The Bad News: He took his hoard with him.

Green and Go to Open Gas Station Outside Rouzer