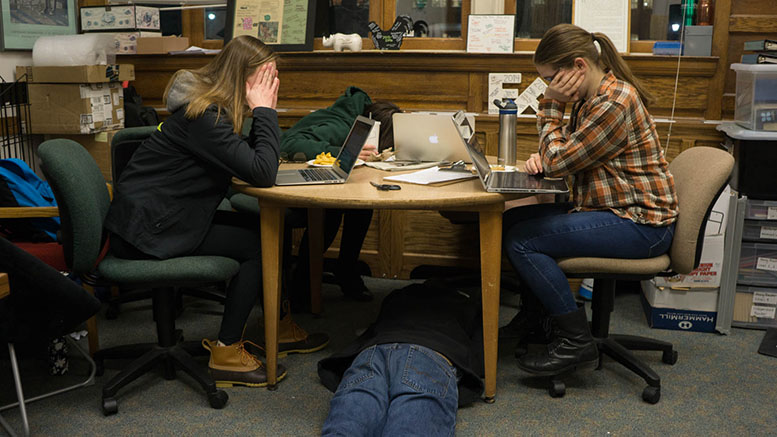 Editors take a brief break while preparing a print issue.

The McDaniel Free Press will be hosting the first annual “Taste of Free Press” event, inspired by the success of similar cultural dinners such as “Taste of Latin America,” “Taste of Asia,” and many others. This event will aim to share the culture of the Free Press and its editors, staff reporters and contributors with the campus as a whole.

The dinner will be served buffet style, and dishes will include a bottomless coffee bar, stale pretzels and pasta cooked using the boiling tears of the editors. This pasta is a special dish that can only be made directly before a print issue is released, and has never been shared with the general student body, so it is not to be missed.

Some additional dishes aim to represent the greater campus community, not merely the Free Press staff, which includes squirrel kebabs, cold pizza rolls and lukewarm soda stolen from another event. And of course, no event would be complete without copious amounts of pizza.

There will also be a selection of performances as entertainment while attendees eat.

The first performance will be an interpretive dance by junior political science major Deborah Mosely, representing the feeling of trying to edit an article while running on only 3 hours of sleep.

Following that will be a series of readings, where each editor will read the article they have written which contains the most conflicts of interest.

There will also be a special performance by Editor-in-Chief Kyle Parks, who will pace anxiously around the room for 15 minutes while grumbling about how no one has sent him an article for the upcoming print issue yet.

Finally, our honored guest, Travis Rouley, Editor-in-Chief of the Julieville Times, will speak about his time in the field of journalism. His speech will be followed by a brief question and answer period, which is especially recommended for journalism minors, English majors, and those hoping in vain to build a connection that will earn them a job in three years.

Tickets will be sold for two weeks leading up to the event, and the price for students is the submission of one article that does not include your roommate as a source and is not about something you are directly involved in.

The importance of music education