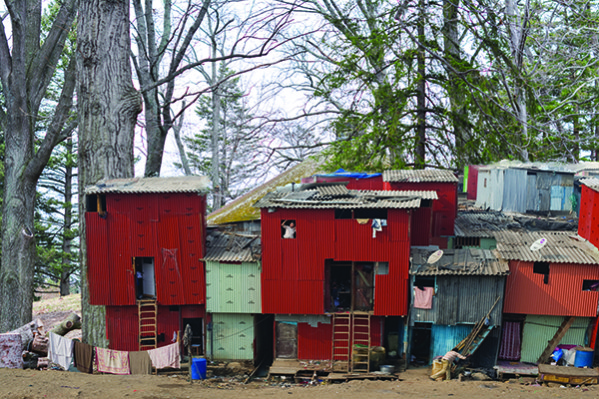 After yet another tuition increase was announced for the 2016-2017 school year, McDaniel students have begun to construct a shanty town in Harveystone Park in an attempt to create a place for them to live next semester.

The shanty town, nicknamed “Caseyville,” begins at the edge of the soccer fields and stretches through Harveystone, with some shacks built right on the golf course. Students are using whatever material comes to hand to build these shanties, such as cardboard, branches, blankets, pillows, and any textbooks that they were unable to sell back.

The idea originated with a group of juniors who originally had planned to live together in a Gardens apartment for their senior year.

“After we heard about the tuition increase,” says junior Terrence Golodnyy, “We realized that it just was not going to work. However, we still wanted to find a way that we could all find a place to live.”

Fellow founder of Caseyville, junior Sara Hamac explains, “We got the idea from seeing the small village of hammocks in the quad on those first warm days. I asked myself, why stop there? I thought that creating a shanty town would solve problems for many students who were facing the same housing issues as we were.”

The shantytown is thought to house roughly 100 students, with more arriving each week.

Caseyville has become a thriving community on the Hill, as students cook together in the community kitchen, which is housed in the pavilion in Harveystone Park.

“At first, I thought I was going to miss the food from Glar,” reminisces sophomore Elizabeth Krank, “But after the first bout of food poisoning I realized that this place was really becoming home.”

Students have also set up a makeshift library, where students can swap textbooks for the next semester.

Some students have voiced concerns about the stability of the shacks and their ability to be warm during the winter. Golodnyy is confident in their ability to stay warm, and has begun to insulate his shanty with the burnt breadsticks from Glar.

Residential Life are working with RAs on plans to convince students to return to residence halls next semester, but so far have been unsuccessful. After a brief discussion with administration, some RAs have chosen to move to Caseyville, where they are now busy constructing treehouses for themselves.

Student Gets Hair Cut Short over Break, Is Unhappy