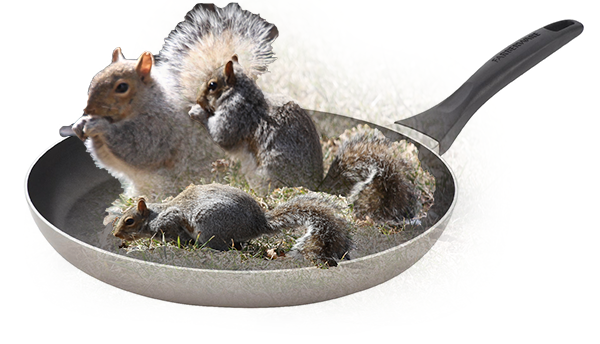 A startling discovery from Dr.Jekyll’s Genetics class has lead to critical look into Glar’s kitchen. The professor assigned students to a simple task, test the molecular structure of a piece of food. Trouble arose when one of the lab groups came across an anomaly.  Hugh Jass and Bea O’Problem, two sophomores, were expecting their Thursday chicken tenders to display the makeup of the average gallus gallus domesticus.

“The tenders instead were comprised of various members of the sciuridae family,” Jass explained, “otherwise known as squirrel.”
It turns out the small rodents are more than just a common pest, but also a tasty treat. Known as the chicken of the trees, squirrels have long been a staple in American cuisine. According to Jass and O’Problem’s data, Glar has taken a page out of colonial cookbooks.

O’Problem stated that, “the most interesting finding was the variety of squirrel. The most common type was the gray squirrel, followed by flying, red and fox.”

The anonymous added that the foreign squirrels are kept contained because “it is easier for the meat to bone ratio to be tracked and maintained” which ensures a thicker and juicier tender.

When asked to comment, Sodexo Consultant Anita Bath explained that the school is trying to cut down on cost and that there has been an initiative started towards the usage of alternate, cheaper sources of meat.

Cheaper sources of meat, such as squirrels?

“No comment,” Bath smirked before fleeing in a fluffy brown fur coat that smelled faintly of acorns.

O’Problem and Jass were certain that there were no toxic chemicals, pesticides or disease in the tenders, only squirrel meat. With the lack of harmful substances, Glar will continue business as usual. That squirrel you see scampering across red square may soon be coming to a plate near you.

However the discovery has sparked investigations into several aspects of the kitchen including the chemical makeup of “boom boom” sauce. Is it just Texas Pete’s hot sauce mixed with Sriracha or might there be a little gunpowder in there? Only future tests will tell.

How to Raise Your Green Terror