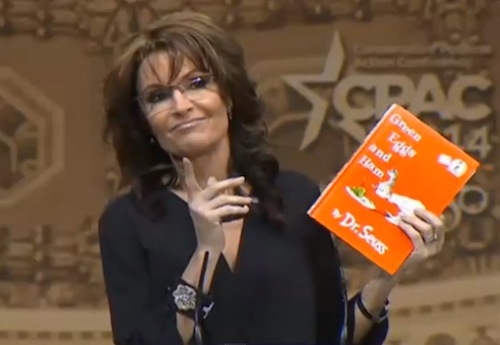 Dr. Seuss, the epitome of the ideal Conservative writer, has inspired many of our country’s leaders (specifically many of the Grand Old Party’s members) to stand up for what he believed in. The varied uses of his books are just one way in which they honor the memory of the late great conservative author.

McDaniel College has decided to figure it out for themselves. Down Hutch, professor of Political Science at McDaniel College, was willing to comment.

“We really feel as if this class will give students a better sense of the current political arena.” Says Hutch, “In the past few weeks we’ve seen politicians like Sarah Palin, Ted Cruz, and Edward Markey, use the Seussmeister effectively to communicate their platform, why shouldn’t students be learning to utilize this valuable source of political thought as well?”

The move comes as a response to the growing use, and caliber, of intellectual rhetoric dropped regularly on the House and Senate floor, as well as at political partisan gatherings. Literature such as, Green Eggs with Ham, The Lorax, I Can Read with my Eyes Shut, even after the implementation of Obamacare with the reading of The Big Brag.

Yes, President Obama fell into the Seuss mongering trap, reading from The Big Brag after an attempt by former Alaska Governor Sarah Palin to use Green Eggs with Ham in her CPAC speech against Obamacare and the Obama administrations socialist-imperialist-fascist eight-year rule.

Ted Cruz, R-Texas, like Palin, also took time out of his 21-hour harangue against the Affordable Care Act to read Green Eggs and Ham using it to critique Obamacare, stating that the American people have already “tried it” and they don’t “like it.”

When asked for her opinion, Sally Oncler a junior and Political Science major at McDaniel responded, “I really feel like it’s an important class… McDaniel says it’s dedicated to fostering caring and intellectual students, but up until now there hasn’t been a course offered in my department that covers the type of contemporary literature influencing major decisions in our country are utilizing.”

Of course all have not welcomed the introduction of the course. Dr. Von Eiffel, another professor in the department, and Political Science major Horton Grinch, have also voiced their concern.

“The study of a great conservative like Dr. Seuss and his influence on the GOP would steer too many of the students in one direction. A liberal education means just that: a liberal education” said Von Eiffel.

“I’m a bit conflicted,” began Grinch, “On the one hand I feel like studying conservative writers is great way to balance our education, and could make our hearts grow ten times their normal size! On the other hand I fear that such intelligent critique might be better suited for grad students than us undergrads.”

The class, approved and already full to bursting, is expected to spark campus wide discussion; even more controversial, than a previous article on racial stereotyping.

When asked to comment on this, Dr. Von Eiffel scoffed, “The nuances of institutionalized racism are easily and widely grasped by the campus community, even in all their complexity. Dr. Suess’s words however take years of study, and, I fear, may leave the students more confused about America’s difficult two party system than informed.”