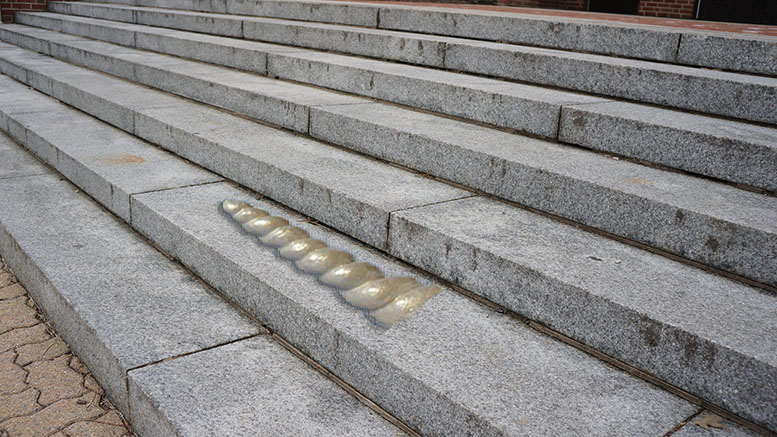 The McDaniel College community has been divided by tensions due to a recent discovery made by junior Natalie Hughes. On Friday March 17, 2017 Hughes discovered what some believe to be a unicorn horn on the steps outside of Hoover Library.

“As I was going to the library to study, I noticed a shimmering object on one of the steps, and found what looked like a unicorn horn,” Hughes stated.

While Hughes discovered the horn, she found no evidence of the creature itself. “Once I saw that the horn seemed to belong to a unicorn I looked around and didn’t see one running away or anything” said Hughes.

As no other mythological animals have ever appeared on McDaniel’s campus before, the apparent discovery of a unicorn horn has been met with skepticism by much of McDaniel’s student body.

“Anyone who thinks the horn is from a unicorn is either lying or delusional,” declared sophomore Matthew Reynolds.

However, some students do believe that the horn does in fact belong to a unicorn.

Freshman Scott Curtis said, “The horn had to have come from some type of animal, and it shines, so it would logically make sense for it to have come from a unicorn – other animals known to exist have horns and none of their horns shine.”

Junior Heather Morrison stated, “I will give the benefit of the doubt to the unicorn, though I remain skeptical of any mythological animals’ existence.”

Some students, in typical McDaniel fashion, remain completely apathetic as to whether or not the horn belongs to a unicorn.

This sentiment was echoed by freshmen James Gibson who stated “I have no opinion and don’t care, and I’ve never cared about unicorns.”

Hughes, who originally found horn, remains undecided, as to whether she believes the horn came from a unicorn or not, stating, “I don’t know, finding a shining horn outside makes you wonder, though.”

McDaniel President Roger Casey offered no comment when asked if he believed the horn came from a unicorn.

With the horn of a unicorn possibly being found on campus, and the body of the unicorn seemingly gone, perhaps McDaniel is a place where mythological animals, as well as dreams come to die.