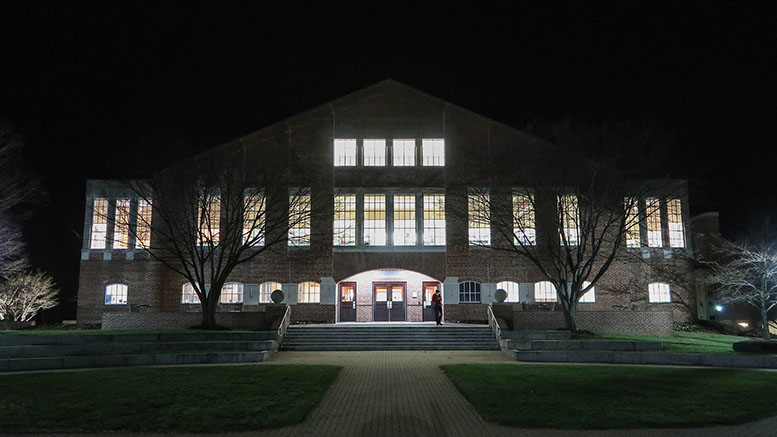 Upon returning to campus for the Fall 2017 semester, many students were concerned to find that Overnight Study Hall had been cancelled, and that the library would be closing at midnight during the semester.

When looking at the reasoning behind the cancellation, Director of Campus Safety James Hamrick stated that it was a result of budget reevaluation at the beginning of the 2017-2018 school year.

“As you know, there’s been budget constraints, and there’s been an endeavor to try to trim the budget and try to keep tuition costs down, and so one of the things that was asked of the divisions and the departments within those divisions is to look at our budget, to look at those areas in which we could create efficiencies,” said Hamrick.

When looking at how this affected the library, Hamrick noted that a large part of the decision was based on the low usage numbers during the later hours of the night and earlier hours of the morning.

“The security for the library was one of the things that was examined, and so there was a collective decision that was made based upon data which we actually got from the library, and looking at the data over the past two years,” he continued “and there was a consistent pattern that after 2 a.m. it was down to single digit numbers, and the cost associated with that didn’t seem to support that investment.”

Many students expressed concern that the cancellation of these hours would be to the detriment of the student body, and would especially hurt students who, due to personal preference or time commitments, were only able to study during the later hours of the night.

A petition was quickly launched on Change.org by student Ash Kwiatkowski, which was spread across social media by a wide range of students, and alumni, who argued that the changes needed to be reversed. The petition reached a total of 693 signatures by the time it was closed.

“This thing that I’d been using for years now, not just during finals week, but really throughout the year for multiple years, is going away,” said Ash, “and the people I see there, they aren’t just fellow night owls like me, it’s people like athletes that are doing night practices and can only use that space after hours, or people who are working during normal hours and therefore have to come here after hours. It affects so many different people.”

Many also noted that, according to the annual report issued by the Hoover Library, between 2016 and 2017 the number of overnight entrances had increased by 1,469, showing that students were using these hours more often than they had in the past.

Continued petitioning and student action eventually prompted the school to begin reevaluating its position. Library Director Jessame Ferguson told the Free Press that “we are trying to figure out how to have some hours past midnight that are staffed by student employees, and we are currently looking into which of our student employees are willing to work past midnight, how much, and how often.”

She also noted that the library would be committed, as always, to maintaining finals week hours, and would be looking to possibly hire new student employees to work night hours (though these students would still be required to work during the day as well).

On Sept. 10, the student action had an effect, as Provost Julia Jasken emailed the Free Press a planned release, stating the following:

Thank you for your feedback on the decision to cut back on the overnight study hours in the library. We are always looking for ways to keep our costs down to ensure your college experience is as affordable as possible. An assessment of overnight hours from last year showed relatively low usage between the hours of midnight – 4 a.m. with virtually no usage between 4 a.m. and 7 a.m.

Despite these low numbers, we do understand the importance of having this space available, should you need it, particularly during mid-term and finals week.

To that end, we are in the process of hiring a staff member who can keep the library open until 4 a.m., which should meet the vast majority of the student need. We will also soon be seeking student workers interested in working with this staff member to cover the hours from midnight to 2 a.m. If you are interested, the Center for Experience and Opportunity can provide you with information on how to apply.

It may take us a few weeks to get the staffing in place, and we appreciate your patience everyone is trained. But please be assured that you will hear back as soon as the evening hours are available. I hope it goes without saying that your educational experience is incredibly important to us, and we are always looking for ways to make sure that experience is high quality.

Provost and Dean of the Faculty

This change was hailed as a victory by the students, and was met with celebration by the petition’s creator and its sponsors.

“Six hundred and ninety-three. That’s how many people spoke up and said that the students of McDaniel have a right to use the library past midnight,” posted Ash the day after the announcement. “Thanks to each and every one of you, we’ve gotten those hours back.”

While transitions are still in progress, hours have already been extended for the week of Sept. 24, with the library being open until 2 a.m. on Sunday, Tuesday, and Thursday. Whether the hour offerings will continue to be expanded is still to be seen.

IT department unveils technological updates for start of fall semester