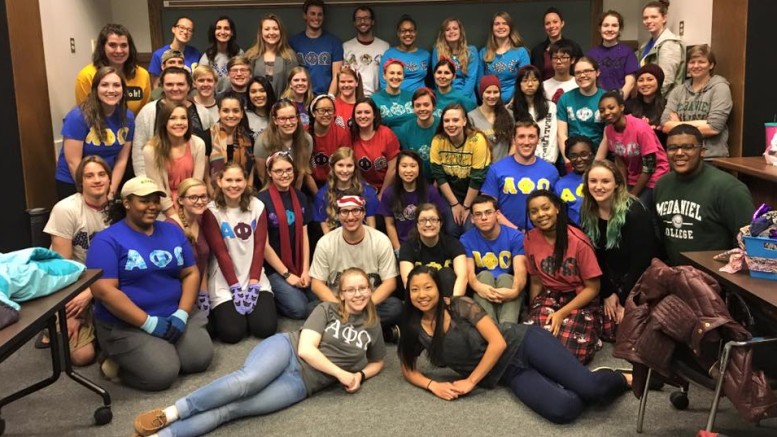 Editor’s note: after the writing of this article, APO pledged 17 new members on Feb. 26.

Alpha Phi Omega, a service fraternity at McDaniel, has grown to now encompass approximately 63 students, more than doubling its size in just one year.

APO’s Secretary Dori Nance states, “My pledge class, and a pretty typical pledge class for us, is nine to 12. But then spring semester last year we had 21, this past semester we had 28.”

Those on the executive board of the fraternity attribute a variety of reasons for this rapid growth. APO President Angel Petty believes that the organization benefits from not having negative stereotypes that tend to impact social Greek life. She states, “There’s a lot of negative connotation[s] when it comes to social sororities and fraternities sometimes, and I think a lot of the new people on campus definitely know if they’re in to that or not.” However, students are free to join a social fraternity in addition to APO.

Nonetheless, Nance clarifies that, while APO does have some social aspects, the fraternity has no club room, no large get-togethers, and no formals, to name a few. She adds, “service is one thing [social Greeks] do, but it is what APO does.” Petty says that APO provides a direct route to service.

It is this service itself that constitutes another main reason leaders see for membership. Nance adds, “I did a lot of service back in high school and I wanted to continue that because I wasn’t really sure what the outlets really were in Westminster.” These include some organizations that APO assists with regularly, like ARC.

This great increase in size has had some impacts on the fraternity, most notably that it now enjoys a higher profile on campus. Robertson asserts that, while involvement hasn’t increased too much per member, the organization is now able to do more as a result of its many members. She notes that the fraternity is now more well-known on campus.

Like any organization, there are those who are more involved than others. Nevertheless, Petty states, “The newer members have really been on the ball and jumped to get more leadership positions and roles in our executive board. It seems that the trend of people who are joining definitely want to be more involved.”

Meanwhile, Nance believes that there’s a new sense of excitement among members due to the organization’s ability to do more with its amplified membership. Nance adds, “We can definitely outreach a lot better than we could [in the past], because we have more resources.”

However, APO’s rate of growth appears to be slowing. Robertson doesn’t believe that the fraternity will grow very much in the next year or so, saying, “…we’ve already pulled a great number of people in who seem to be interested.” Evidently, the fraternity pulled in many of those who would be interested in the past two semesters. Thus, the fraternity is waiting for more potential members to come to McDaniel.

According to Nance, the fraternity is still getting interested students and is unsure about this semester’s final number, though the figure currently sits at under 10 students. “It’s going to be a little bit smaller this semester, but we weren’t even prepared for how big it was going to get the last two semesters,” she states.

Regardless, Petty remains optimistic, stating, “I don’t know if it’s going to jump up again this semester, but I think over time it’s definitely going to grow even more.”