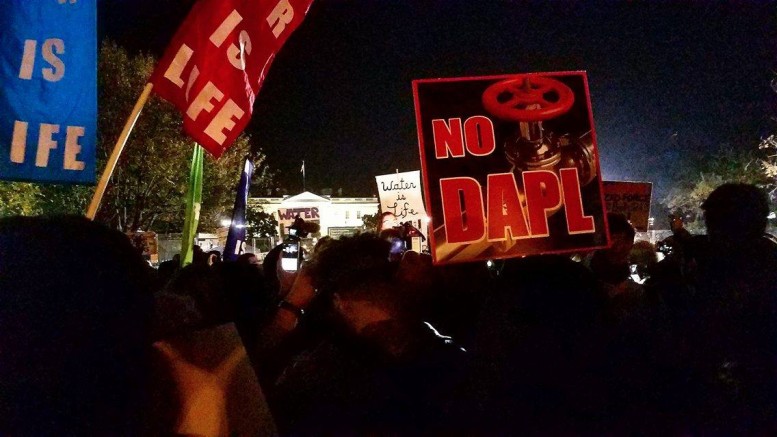 Protesters demonstrate in front of the White House in DC. Image courtesy of Simi Adeoye.

The students protested against an underground oil pipeline that would be 1,134 miles long and potentially have environmental repercussions for Native land. Protesters have been gathered in Standing Rock Reservation since spring of 2016, where some have been arrested and there have been allegations of force against protesters, such as police dogs, pepper spray, tear gas, rubber bullets, water cannons, and concussion grenades in freezing weather. As a means to support the protest at Standing Rock, Nov. 15 was declared a National Day of Action in hundreds of cities across the country.

According to junior Darby Bortz, Eryn Wise from the International Indigenous Youth Council gave a speech during the protest.

“[Wise] spoke about the people she loves, children she cares for, who are being attacked by local police on a weekly basis.” Bortz explains, “She told us how she is being constantly surveyed by federal agents and how her people are seen as extremists. Yet all that she and her people want is their land, that has seen terrible bloodshed since the treaty of 1868, to remain safe. Land that they rightfully fear will be destroyed by this pipeline. Because how will they live when the water they drink is polluted?”

Bortz explains, “I really enjoyed hearing what he had to say. ‘If there is one profound lesson that the Native American people have taught us, it is that all of us as human beings are part of nature. Our species will not survive if we continue to destroy nature, so today we stand united in saying, Stop the pipeline, respect Native American rights, and let us move forward to transform our energy system away from fossil fuels.’” 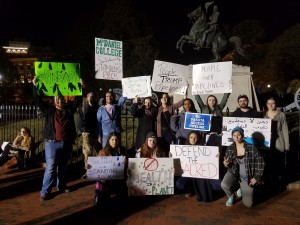 The students and other protesters are concerned that the issues surrounding the Dakota Access Pipeline are being overlooked. “The DAPL protest in DC was extremely important as it was about an issue that I feel everyone can understand and yet many still choose to ignore,” says Bortz, “The pipeline threatens to continue our nation’s dependence on fossil fuels and harm countless people in order to do so.”

Sophomore Simi Adeoye, another student who participated in the protest in DC, is emphatic about the need for the government to not repeat history. “The United States has treated Native Americans so horrible since the creation of this nation. Land was stolen, Natives massacred…but we do not seem to be learning from the past. They ask for the waters not to be poisoned, for promises made to be kept yet they are branded as terrorists and violent protesters.”

The students who participated in the protest felt that it was their duty to speak out against the violence and wrongdoing being committed against those in Standing Rock.

“I feel like as a student it’s important to participate in events like this in any way shape or form. We are in charge of creating a better future not only for ourselves but for everyone else as well,” explains Adeoye.

“The violence being enacted against the people of Standing Rock must come to an end,” states Bortz, “The Dakota Access Pipeline is not worth the lives of innocent people.”

Homecoming in the past: From the Archives