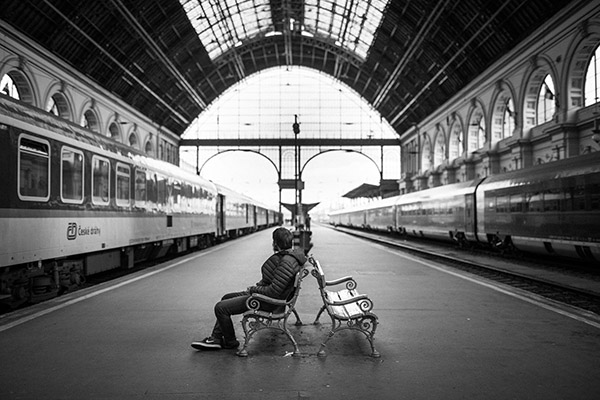 A multi-floored structure brimming with the latest in contemporary art, the Whitney Museum of American Art, one of New York City’s treasures, is worth a visit for any artist. McDaniel College art students did exactly that.

While the gallery floor was full of many eye-catching exhibits, perhaps one of the most noticeable was Vokzal, by Leigh Ledare. Spread out over two rooms, Vokzal was a truly mind-capturing exhibit.

Born in Seattle in 1976, Ledare received his MFA from Columbia University. The majority of his work utilizes elements such as photography, film, and text to discuss the nature of human identity and its relationship to culture.

Vokzal is no different in its dealings either. Using 16mm color film threaded onto three old-fashioned projectors, Ledare recorded footage of people coming, going, and waiting at three adjacent train stations in Moscow, Russia. Set up in different locations in the Whitney, the three projectors are intended to represent the three different stations.

The three approximately hour-long films chronicle all manner of everyday events that occur at the train stations. They show people disembarking, talking, giving directions, fixing their hair, smoking, and an array of other activities. Over the top of the projected film are sounds of trains starting and chugging. These sounds are not particularly soothing but are rather eerie and disturbing.

According to the plaque at the Whitney, Vokzal is a social commentary represented via an observation and presentation of human existence and interaction. It brings out, as the plaque states, conflicting ideas of order, which result in social fracture and breakdown.

This breakdown is in part caused by humans’ constant and unconscious shift between different responses to society, whether that be “dependency, fight-or-flight responses, pronounced individualism, and [or] non-differentiation,” according to the plaque statement.

Interestingly, Ledare intends for the viewers of Vokzal to almost enter in and reflect on the reality and relatability of the people in the train stations.

An intriguing exhibit, Vokzal does not back down in its bold presentation of reality and its challenge to the viewers. Artistically, it stands out from the others with its old-fashioned, eye-catching projectors and relatable visual images and sounds.

In fact, relatability is perhaps what sets Vokzal apart from some of its surrounding exhibits. Any viewer who has been to a train station or even an airport can find understanding when looking at Vokzal, and even if one has not been to either, just the simple existence and behavior of every day humanity in space and time is instantly recognizable and relatable for any viewer.

McDaniel College’s field trip to New York City was a highlight for many students interested in art, and the Whitney Museum of American Art did not disappoint these students. Showcasing some of the best of contemporary art, the Whitney’s exhibits actively encourage viewers of all ages and backgrounds to consider some of the most important issues of today.