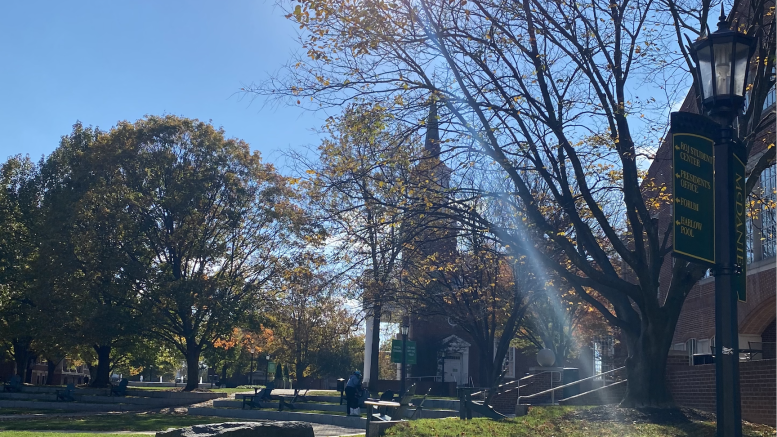 With America’s political climate being tense, McDaniel College students have found political topics becoming more common in conversations with their peers. Students have had different experiences when discussing politics on campus.

The diverse atmosphere of opinions allows for potentially tense situations to occur when discussing politics on campus.

“From what I have seen at McDaniel, I believe politics can affect friendships,” freshman Kyla Farmer said. “In the days leading up to the election, I overheard conversations in the Pub as well as the dining hall and if these people were my friends, I would leave the friendship.”

Farmer says compared to past years, she feels more comfortable talking about politics with her peers.

“I am still hesitant to talk about politics today, however if someone mentions it first, I am more willing to enter the conversation than I was in the past,” Farmer said.

Despite her openness to have political conversations, she has found some of her peers are close minded and are not open to hearing her views.

“A majority of the time my peers are not interested in what I have to say, they are set in their ways and don’t want to hear the other side of the story,” Farmer said.

On the other hand, sophomore Kameron Ellison has rarely encountered students who are not open to hearing different points of views.

“I think for the most part, people are mature enough to hear the other side. Very few times have I encountered somebody who won’t listen to the opposing viewpoint.”

Political differences have been seen to produce conversations that end in arguments and anger. On the USA Today website, Susan Page summarizes this idea.

“They storm out; this one said that; it’s tit-for-tat; I’m going to throw mud at you; you’re going to throw that mud back. It’s like they can’t even work on anything,” Lynn Andino, a nurse and political independent who was interviewed in Page’s article.

Junior Gabi Cohen has had mixed experiences with expressing her political beliefs. While she does not see her beliefs affecting any friendships, she is not comfortable openly discussing them.

“I do not really feel all that comfortable sharing my views with my professors either,” Cohen said. “I have definitely heard stories about professors treating certain students differently after finding out their political beliefs and I don’t want to be penalized for that.”

Cohen feels that because her political beliefs do not align with the majority of students, she is unable to openly express how she feels.

“[My political beliefs are] not shared by the majority, which is why I do not share my political views with most people on campus,” Cohen said. “I do recognize that Carroll County is much more conservative than where I grew up, but the student body is pretty liberal as a whole.”

When discussing her interactions with students, Cohen feels she is often stereotyped by her outward appearance.

“I feel like a lot of people assume my political views because my outward appearance (Latina, Jewish, queer, brown) and are surprised when I discuss them,” Cohen said.

Regardless of her experiences, Cohen feels like she is in a safe political climate at McDaniel.

“However, attending McDaniel has allowed me to escape the political bubble that I used to live in and really allowed me explore and develop my own personal views and policies,” Cohen said.

Other students agree with Cohen’s statement on the safe political atmosphere of McDaniel.

“On The Hill, politics do not determine friendships. I see many people who put their political views aside from their friendships,” Ellison said.

Moving forward, Farmer says if students research and learn more about political views other than their own, it can help produce a better environment for discussions.

“Everyone has an opinion and being aware of both sides before having a conversation will make the conversation feel more friendly and less like an attack on each side,” Farmer said.