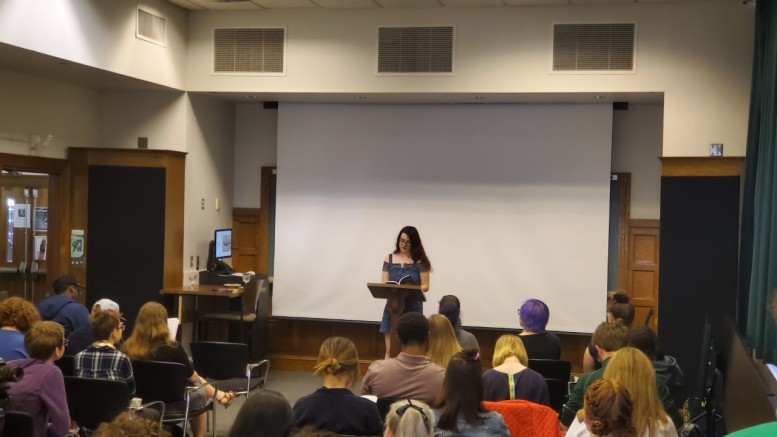 On April 18, McDaniel’s Contrast literary magazine returned to debut their stellar 2019 issue. The newest issue of the magazine came after months of hard work from the co-editors-in-chief, Editorial Board, and contributing writers and artists. It was received by an eager body of readers.

Co-editors-in-chief Marya Kuratova and Emma Driban opened the ceremony by celebrating the many authors and artists that contributed. Alongside a slideshow of the many art pieces and photographs that were published, contributors were invited to read their entries to the crowd. Among these readings were John McEachern with his first-place poem “Diary from the End of the World” and Maddy Lee with her first-place prose piece, “A Woman’s Routine.” Kuratova and Driban both read selections from their published work as well.

The 2019 issue is 103 pages long, with a photograph of Baltimore’s Domino Sugars sign splashed on the cover, the classic “Domino Sugars” replaced with the words “Contrast Literary Magazine.” Its three sections of poetry, prose, and art each received a multitude of submissions, organized in the issue by contributor last name rather than section type.

Each category has three cash prize winners: $100 for the first-place winner, $50 for the second, and $25 for the third.

The winner of the prose category was “A Woman’s Routine” by Maddy Lee. Second and third prizes were awarded to Lucas Craig’s “Novelty Pens” and Kaylan Hutchison’s “You’ll Love Your First Job,” respectively.

The art category’s first-place winner was Lauren Beckjord’s “The Terror of Man.” Second place was given to “Hooper Island” by Jonathan Nepini. Third prize went to Brenna Gutshall’s piece entitled “His Name is Conroy.”

The poetry prize winner was John McEachern’s “Diary from the End of the World.” Second prize was awarded to Becca Halaney for her poem “I Love You So Much.” Jacob Summerlin received third prize for “James Gatz.”

Copies of the Contrast literary magazine are free of charge, and can be found in multiple locations around campus.