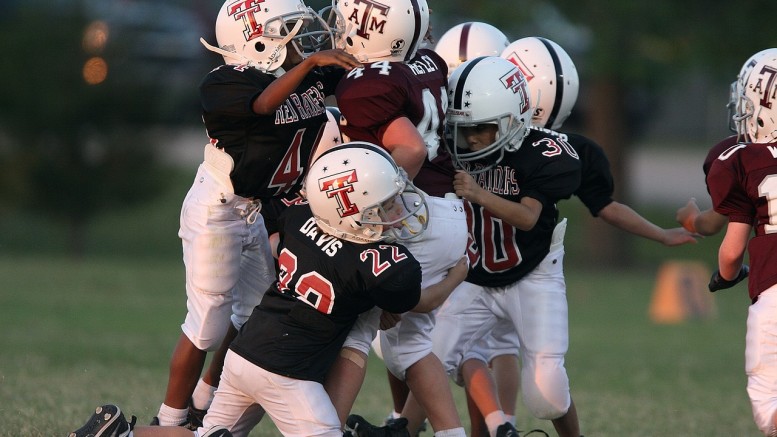 The threat of concussions and injuries in football has not gone unnoticed in Maryland. Proposed legislation in the General Assembly would put a ban on tackle football played on all Maryland public grounds and publicly funded facilities at levels before high school play.

“This is about a vulnerable population and developing brains,” Del. Terri Hill, physician and Howard County Democrat,” told the Baltimore Sun. “It’s a public health issue.”

New York lawmakers are proposing similar legislation outlawing tackle football. In addition, other sports like soccer and hockey have rules implemented where contact to the head or brutal body contact are prohibited for young players.

For the 102 Green Terror footballers, the journey to collegiate level football began on the same level that potentially may be banned. Few go on from playing football only a few years to the collegiate level. It is a process that takes years to develop.

Although many began playing tackle football during youth years, the threat of injury is one that players are aware of.

It is a danger and contest that the American public spectates more than any other sport. Stadiums are jam-packed on game day for all levels. Even McDaniel’s stadium is a hotspot for on campus organizations, local spectators and alumni. The interest in the sport has became woven in American culture and with possible changes to the game coming, waves of change could reach beyond the goalposts.

“This can have such a huge ripple effect on football,” freshman Eric Chung said. “How can one be a talented football player and possibly be looked at as a serious college prospect if you only play in high school? That’s gonna throw Maryland high school football into hell.”

The issue of concussions and other injuries has the potential to funnel into major issues such as CTE, a degenerative brain disease that can cause memory loss, confusion, impaired judgment, impulse control problems, aggression, depression, suicide, Parkinson’s, and eventually progressive dementia according to studies from Boston University.

Studies stemming from Boston reflect the suicide of former New England Patriots tight end Aaron Hernandez. Hernandez was serving a prison sentence at the time of death, but his autopsy revealed extreme levels of CTE.

With the danger evident, solutions are suggested to be implemented at the highest level of play and trickle down. It is the big hits that draw the awes, but those huge collisions are dangers to both offense and defense, and it is the incorrect way to play.

“The NFL needs to be the spearhead of change [because] they are the model,” McDaniel head athletic trainer Gregg Nibbelink said. “Ultimately if they say something everyone looks to them and says ‘if they believe change needs to occur, lets change.”

Football fans, players, and trainers agree that there needs to be action to protect all football players, not only youth players. The process to making the sport safer has experienced some changes, but has not progressed far.

“If I were in a position to make decisions it would be to inform all coaches part of an organization the proper way to tackle and bringing the head out of the game,” Igo said. “Equipment is also just as important, there has been big advancements in helmet technology and they keep getting better.”

The discussion of safety and legality of America’s most popular spectator sport present both pros and cons. The discussion, like the game, has both an offense and defense and the importance of safety seems to fall in between.

“For me personally, flag football is a great alternative,” Nibbelink said. “ You can teach the game and allow kids to enjoy the game, it is the tackling aspect that is the biggest concern.”

Brackets Upon Brackets: How did ‘The Guru’ do this year?