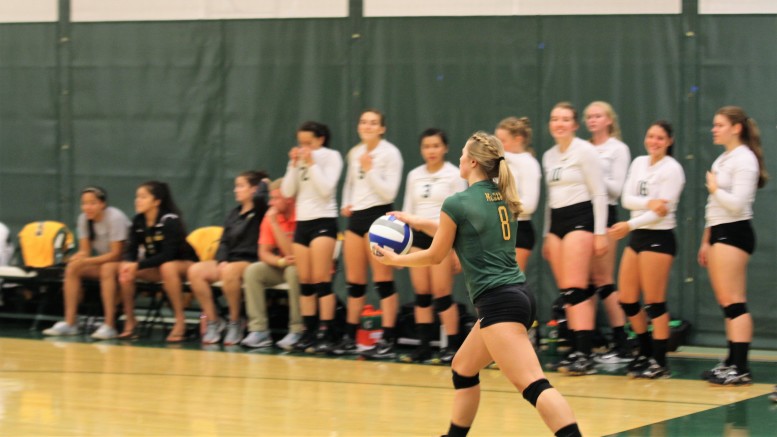 Pushing through any fatigue coming from playing three games in two days, McDaniel Volleyball collected home-court victories over St. Mary’s, Goucher, and Alvernia on Sept. 8 and 9.

Well-rounded team play was essential to the team’s success as statistic leaders were divided among many contributors over the weekend.

Leading the team in Friday’s 3-0 sweep against St. Mary’s (1-6) was freshman Emma Lorenzen who tallied seven kills and five blocks.

Freshman contribution has been evident throughout McDaniel’s (7-1) season.

“[The freshmen] are a very special group,” Head Coach Jessica Wolverton said. “The team has really welcomed them.”

Captain Taylor Bauman dominated the Terror’s victories over Goucher and Alvernia Saturday. The junior led the team with seven aces and 54 digs, helping the team to extend their win streak to six games.

“[The win streak] feels really good,” said Bauman. “I’m really excited for the rest of the season after these six wins.”

Despite the weekend outcome, McDaniel faced decent opposition in all three of their matches.

Friday’s match with St. Mary’s was capped off by a McDaniel sweep, but not before Brigid Morris was able to rack up six kills for the Seahawks.

Alvernia brought the strongest opposition in the Terror’s final match of the weekend as they took the hosts to five sets. McDaniel pulled ahead with wins in the first two sets before Alvernia responded back with two wins of their own. Heading into the fifth and final set the momentum carried by the Green Terror proved to be too much as McDaniel emerged victorious 15-12 in the final set.

“We met in a huddle and I said, ‘Guys, let’s have confidence in ourselves and each other, I believe in everyone and let’s go out and give it our all,'” said Bauman of her captain’s speech after the two Alvernia set wins.

“I love my team,” said Bauman. “I love how hard everyone works.”

McDaniel returns to action at Gallaudet (4-4) Tuesday at 7 p.m.