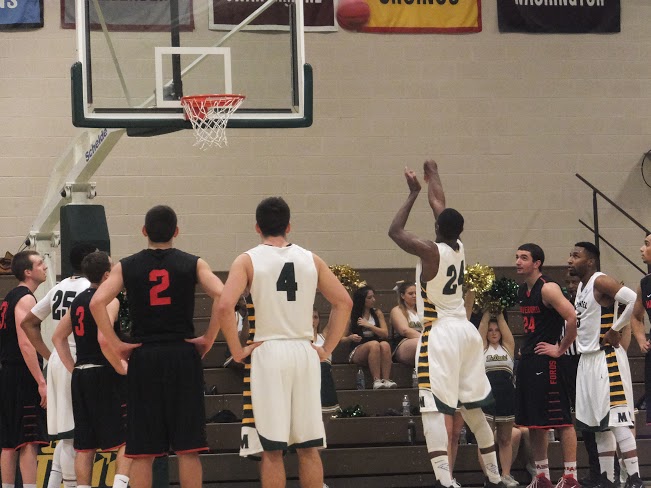 A game honoring McDaniel’s senior players was dominated by junior forward Tim Stewart scoring 25 points, leading his team to a 63-48 win over Haverford.

McDaniel jumped to a 2-0 lead 33 seconds into the game with a Stewart jump shot. Haverford’s junior guard Henry Stevens tied the game at 2-2.  Nearly two minutes later, Stewart made another shot for the Green Terror, and from that point on, they were able to sustain the lead for the remaining 37 minutes.

It took over a minute for the score to change, and with 14:24 to go in the half, Haverford’s Matt Sherman cut McDaniel’s lead to three points. Stewart answered with a layup, and McDaniel’s lead was back to five points.

Sherman made a three-pointer for Haverford, cutting McDaniel’s lead to four.  Senior Phillip Perry answered with two straight baskets, assisted by juniors Wesley Brooks and Cameron Royster.  Perry went to the free throw line soon after and made one of his two shots.

Royster scored again for McDaniel, increasing their lead to 11.  Haverford’s Sherman cut it back to nine with 2:52 left in the half, but a layup by sophomore Kevin Yrizarry brought it back to 11.  The Green Terror went into halftime with a 27-14 lead after another basket from Merlo.

Sherman quickly opened the second half with two three-pointers for Haverford.

Junior guard Duane Echols scored off of an assist by Merlo, followed by baskets from Colombo and Graves for Haverford.

Royster made two layups for McDaniel, followed by a Levine three-ball for Haverford and a Stewart layup.  With less than ten minutes left in the game, Graves hit a layup before Haverford called a timeout.

Haverford junior Anthony Reyes scored a three-pointer, and Stewart answered with a three of his own.  Reyes responded ten seconds later with a jump shot, decreasing McDaniel’s lead to 10.

A foul called on Echols sent Sherman to the free throw line, where he went two-for-two.  Stewart brought the Terror’s lead back up to ten with a jump shot assisted by Brooks.

Stewart and Reyes traded layups, followed by Royster and Graves with less than four minutes left in the game.

Royster and Merlo both went two for two at the free throw line after being fouled by Graves and Levine, respectively.  Sherman scored his final three-pointer of the game with 25 seconds left, but two foul shots by McDaniel sophomore Nick Perugino sealed the win for the Green Terror.

Brooks led the team with five assists, with Yrizarry and Merlo behind him with two each.  Royster also contributed nine rebounds, followed by Perry with six and Stewart with five.

For Haverford, Sherman led the team with 18 points, with Graves behind him scoring nine.  Graves led in assists and rebounds with three and six, respectively.

McDaniel head coach Kevin Curley thought that his team did a good job “attacking the basket” by making layups and getting fouled.

He added, “It’d be nice if we’d hit a couple more perimeter shots. We probably didn’t shoot the ball as well from the perimeter.”

According to senior Phillip Perry, the first half of the game was crucial.

“We wanted to show them early that it would be difficult to score on us, and holding them to 14 points in the first half was good execution on that plan,” he explained. “Tim Stewart and Cam Royster provided good offense, and that helped to keep us going when they made some shots in the later parts of the game.”

Looking ahead, the Green Terror are in position to make the Centennial Conference tournament.

“Going into the game, we were tied for fourth, and the top five teams make it, so the goal is to try to get into the playoffs,” Curley said.

The Green Terror will host Dickinson, a team ranked fourth in the nation, in another conference match-up on Wednesday, Feb. 11 at 8 p.m.

Thoughts from Coach Renner on the Upcoming Indoor Track Season