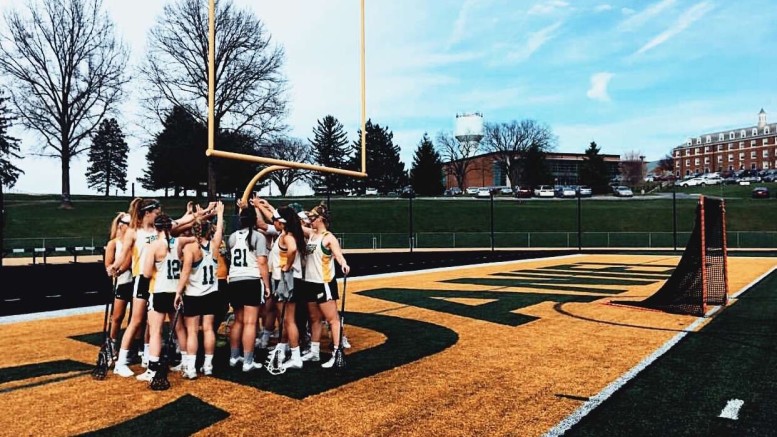 “All in” is the team motto for women’s lacrosse this season, which aims to improve upon their 5-11 record from the 2017 season.

After starting last season with a commendable 4-2 record, tough conference battles in the later part of the season tested the McDaniel team. Following the initial six games, the Green Terrors only recorded one more win — in their final clash of the year against Bryn Mawr, where they came out with a dominating 18-0 victory.

Sophomore Kelly Novak, who is a member of the team’s leadership council for the 2018 season, believes that the “all in” approach will lead to a better season for her and her teammates. More than anything, Novak does not want to see the team drop the ball again once the tougher schedule begins.

“As a leadership group we hope that our motto, all in, will remind the team that each day the players should be 100 percent present, whether it be at a team lift, during practice, or game day when it’s especially important,” said Novak.

The official season begins for the Green Terror team on Feb. 21 with a contest at Stevenson College. Centennial Conference play commences a month later with a home game against Haverford College.

With a bigger roster than they have seen in a while, the McDaniel women are hoping that more bodies and a stronger offensive game will help improve their 8.5 goals per conference game average and secure more wins this season.

“We’re really looking to improve on producing goals. This is something we have really struggled with in the past and it’s hard to win a lacrosse game scoring only eight goals,” said Novak. “We will also focus a lot on controlling the controllables, like our attitude, body language, and communication.”

Junior Megan Kotelchuck, who scored 15 goals in the 2017 season with a shooting percentage of 40.5, will be one of the Green Terrors hoping to find the net more often. Kotelchuck also highlighted offensive cohesion and leadership as areas on which the team would be focusing on for the upcoming season.

“This year we are trying to improve on working as a team offensively and finding each other quicker on the field,” said Kotelchuck. “And now that I’m an upperclassman I have to be ready for underclassmen to come to me when they need help or advice.”

Freshmen, like midfielder Abby Blakenship, under the leadership of the likes of Novak and Kotelchuck, are buying into the “all in” approach and aiming to make an impact in their first year.

“I bring another body to the midfield, which will help the team because it’s a very physically demanding position,” said Blakenship, “I’m also very committed to the team and will always have everyone’s backs for whatever they need.”

While focusing on becoming a stronger offensive unit and maintaining strong commitment throughout the season, both Kotelchuck and Novak feel that in terms of team cohesion and unity, the McDaniel women are unbeatable.

“That’s my favorite thing about the McDaniel women’s lacrosse team,” said Novak. “We are very unified on and off the field, working hard every day — I love it!”