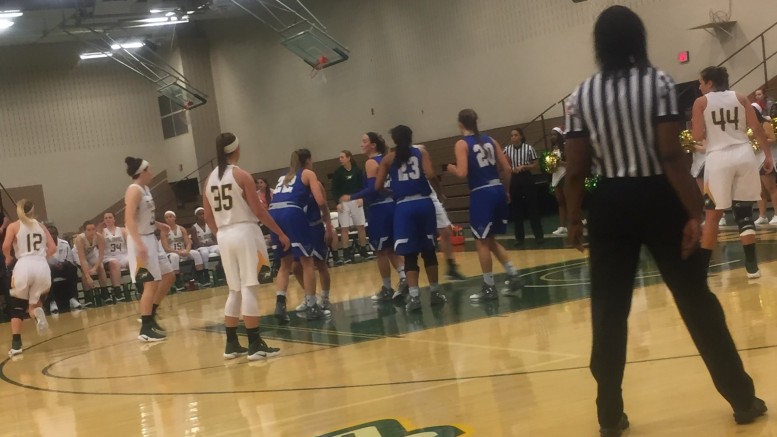 McDaniel women's basketball suffered a close 61-57 loss to Franklin & Marshall on Saturday at the Gill Center. Photo by Elijah Williams.

Saturday afternoon saw a tough loss for McDaniel’s women’s basketball as they lost 61-57 in a closely contested game against Franklin & Marshall at the Gill Center.

The Centennial Conference game was filled with hard-nose defense and a constant fight from the Green Terror to keep the game within reach.

The intensity started early on in the game as neither team gave up a point until the 8:01 mark. McDaniel (3-6, 2-3) drew first when junior guard Jazmine Smith scored the first two points of the game with a strong drive to the bucket, finishing with contact to draw the foul. From there, Smith sank the free throw to put up the Green Terror 3-0.

Franklin & Marshall (3-5, 3-3) pulled ahead with an Ashlyn Peterson 3-pointer with six seconds left in the first quarter to extend the lead to 18-10.

The second quarter saw the Green Terror continue fighting the uphill battle with more tough defense and scorers finding their rhythm. By the end of the half, the Green Terror closed the gap to three as senior Karli Zeps finished at the rim with a layup.

The battle truly began in the third quarter as the Green Terror clicked on offense and continued showcasing intense defense to tie the game.

A strong block by Zeps followed by a Smith jumper evened the game at 35-35. The quarter ended with the Diplomats leading the game by the score of 45-39.

The Green Terror lost their steam in the fourth quarter, letting the game ultimately slip away by the score of 61-57.

“We should’ve had that one, but it was just effort in the earlier part of the game that messed us up, but we’ll get them next time,” said Smith after the game.

Zeps ended the contest with a game-leading 18 points and nine rebounds on five of 15 shooting from the field. Smith contributed 14 points, four rebounds, and three assists.

The Green Terror finished the game shooting 31 percent from the field and forcing 23 turnovers.

McDaniel will continue their 2016-2017 season on January 4 on the road at Susquehanna.