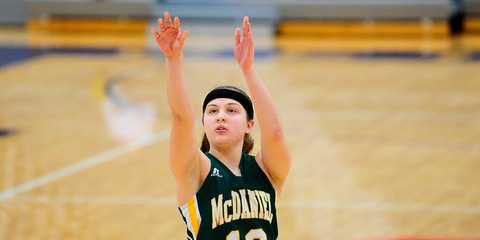 People started jumping and screaming as they witnessed something that had not happened since 1991 – even if they weren’t aware of it at the time. Anna Mondoro, a sophomore guard, had just made seven three-point shots in a women’s basketball game for McDaniel College against Bryn Mawr.

The craziest part about it? She did it in 11 minutes of nonconsecutive playing time as a bench player.

“I got in the game and I told myself to just shoot it,” Mondoro said.

The strategy sounds simple enough, however what Mondoro accomplished was not something that happens every day. Not only did she tie a school record, but she also broke a different school record all in the same game while not being a starter. In 11 minutes of nonconsecutive playing time, Mondoro managed to hit seven out of eight three-point shots attempted.

While most would say this was a once in a lifetime performance, Mondoro would say otherwise.

“In high school, I averaged about 25 points per game,” Mondoro said. “I have hit up to 10 threes in one game before, so I knew I could do something like this.”

Mondoro attributed most of her success to her high school coach, Tasha Fuller, who she says is the best coach she has ever had. Fuller, who coached Mondoro from her sophomore year to her senior year, was always very confident in Mondoro’s abilities.

“From the first time I saw Anna play, I knew she had a lot of potential,” Fuller said. “I always wanted to make sure she performed to the best of her ability when she was on the court.”

When she heard the news about Mondoro’s performance, she was not surprised.

In the three years Mondoro was coached by Fuller at Evangel Christian School in Dale City, VA, she scored 1000 points. She could have had more, but the stats from her freshman year were lost during the coaching change. Mondoro was a varsity starter all four years at her high school. However, she says it wasn’t until her junior year that she really started to change her game.

“I would say junior/senior year, my shooting became a huge part of my game,” Mondoro said. “My senior year, I really started watching Steph Curry and was always in awe of what he could do. I definitely wanted to be like him shooting wise.”

When Mondoro chose McDaniel College, she looked to continue progressing her play from high school. Once Mondoro got here, however, she found herself in an unfamiliar role. She was now a non-starter, something that women’s basketball coach Becky Martin says can happen to some players when transitioning from high school to college.

“As a coach it is always hard to put people on the bench, however I believe that every player on our team is capable of going into the game and making a difference,” Martin said.

Mondoro said it was different going from starting to coming off the bench, but that hasn’t really changed her approach. She is often found in Gill Gymnasium practicing her shot for hours even on practice days. She said that all she wants to do is help her team be successful even as a player that might not get the big minutes.

When Coach Martin put Mondoro in against Bryn Mawr she wasn’t expecting a record breaking performance. Afterward, she was very happy for Mondoro who she says is very passionate about the game. “I always see her practicing in the gym by herself, so it was great she found her shot,” Martin said. “Anna has done something only 2 people in the history of the program have done, which is very exciting for her.”

When asked about it Mondoro said that it was really cool to be in the record books, however she would much rather help her team win games “I think it would be pretty cool to break the record one day,” Mondoro said, “At the end of the day though I’d much rather win a Centennial Conference Championship with my teammates by the end of my college career.”