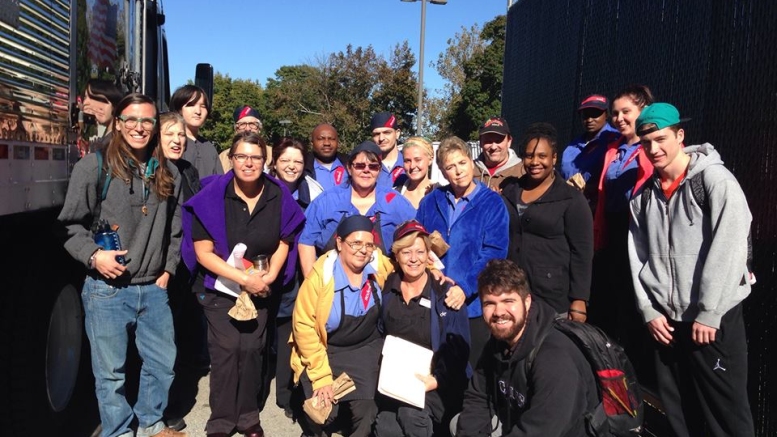 Campus Sodexo workers on the day of their unionization vote. Photo courtesy of Caroline Unger.

Given the number of students working on campus, and recent unionization efforts by adjunct professors and workers in Englar Dining Hall, the question must be asked: can student workers on campus, both work study and non-work study, potentially unionize? And what are the reasons they might do so, and the potential drawbacks?

The answer to the first question is complex, and dives into what it means to be both a student and a worker, along with the natural differences between public institutions and private ones, such as McDaniel.

While public institutions have clearly set out collective bargaining guidelines, on private campuses the line has been blurrier. However, a decision in August, 2016 by the National Labor Relations Board regarding the unionization of Graduate and Undergraduate student assistants at Columbia University stated that such workers did qualify as “statutory employees,” and as such qualified for protection under the National Labor Relations Act.

Furthermore, smaller liberal arts schools such as McDaniel have seen unionization efforts succeed over the past few years. At Grinnell University in Iowa, dining workers unionized during the 2016 Spring Semester. The group then negotiated for a raise in wages and a formal grievance process and expanded further into the student worker community.

In regards to the unionization rights of work-study students who make up the majority of McDaniel student workers, the jury is still out. Some have argued, both positively and negatively, that the decision could very well extend to work-study students; however, no such move has been made, and so such a theory has not been tested.

As to the reasons for unionization, the general goal would be to have collective bargaining rights for student workers, in a manner that would allow them to debate with the administration everything from pay raises to how many hours a week students are offered. It also would potentially help students from different departments discuss their working conditions on campus, and how they as a collective could make changes.

From a drawback perspective, of course, there is the potential that any changes made by the union would cause the administration to tighten the purse strings, or drastically change the way student employment operates on campus in a way that hurt the larger student body. These are both concerns that any unionization effort on campus would have to take seriously.

But as private colleges across the country see the slow and steady push towards greater student rights, and greater protections for student employees, imagining such a push at McDaniel is not beyond the realm of possibility. And while such a move would be a challenge, and is not without drawbacks, it could potentially also serve to provide student workers with major advantages, and more freedom to negotiate with the administration.