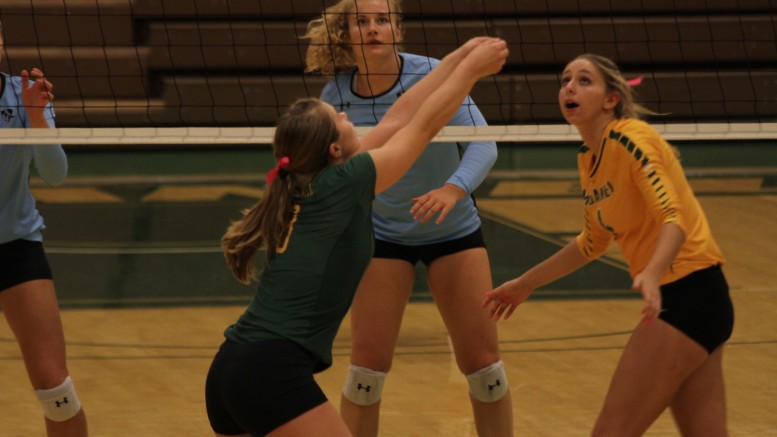 The Gill Center was filled with a sea of pink Wednesday night as McDaniel volleyball hosted their annual Dig Pink event, taking on Johns Hopkins in Centennial Conference action.

Despite Wednesday’s loss, the matchup in the Gill Center created an energetic atmosphere that raised awareness for charity.

The Dig Pink event was held in support of the American Cancer Society and Relay For Life, acutely planned for October: breast cancer awareness month.

The event means much more than volleyball to its participants.

“I love that our team can put these things that are bigger than just volleyball as a focus,” captain Taylor Bauman said. “It makes me happy that we can take time to recognize and support it.”

Swimming in a sea of pink was the McDaniel men’s swim team as they arrived at the game shirtless, spelling out “Go Terror” on their painted chests. Breast cancer awareness ribbons replaced both the O’s.

Adam Halmy of the swim team said the team comes out annually to support the Dig Pink event and the volleyball team.

The four set match between the Green Terror and the Blue Jays had various levels of competition with the closest set kicking off the match.

The crowd and electricity was elevated with the two narrow sets, igniting emotion from the fans and players alike.

“Our team thrives off high energy,” Bauman said. “We play our best when we have so much energy [and] we always strive to have that.”

With Wednesday’s night loss, the Green Terror look to capture the energy from the match with Johns Hopkins and apply it to their next match as they travel to Haverford (12-8, 1-4) Saturday for further conference play.

Basketball lines up for an all-in season