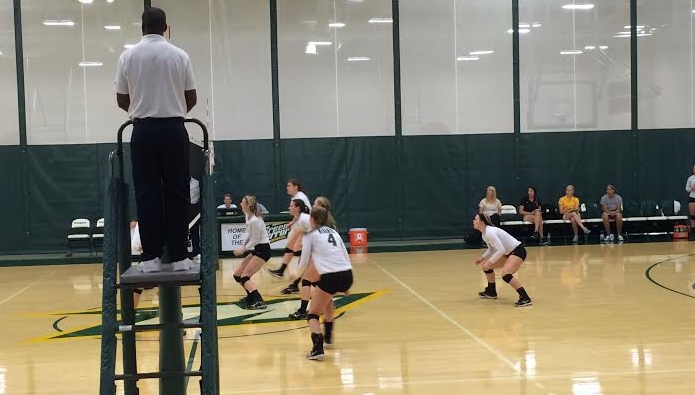 The Green Terror half of the court looks to organize during play in their 3-0 win over Ursinus.

McDaniel tallied their third win in a row on Monday, defeating the Ursinus Bears 3-0 at home.

Senior team captain Madeline Rose led the Green Terror (12-5, 3-1) on offense with eight kills, followed closely behind by fellow senior and captain Kloe Martin, who ended the night with seven kills, as well as six digs on defense.

Martin was second in digs only to junior Genna Weger and freshman Taylor Bauman who both recorded nine digs. Bauman, who leads the team with 229 digs, almost 100 more than second-place Weger (133), added in a spectacular offensive display as well, giving McDaniel their first run during the first set.

The Bears (5-13, 0-5) were highlighted by Karla Thiele, who recorded seven kills and six digs.

Down 1-2 and in possession of the serve for the first time, Bauman subbed in for the Green Terror and led them to seven straight points before a serving error, bringing the score to 8-3, McDaniel’s first lead of the night.

McDaniel started the second set off on a better foot, taking a 4-2 lead at one point, but quickly gave it up to find themselves sitting at 10-9. Strong serves from Weger brought the Green Terror to a commanding 14-9 lead that was not challenged for the rest of the set.

Martin added in a string of serves later to make it 22-11 in favor of the Green Terror. Junior Lexi Corral closed out the night with the final two serves, with Martin earning the kill for the final point to take the set 25-14.

The third set was all but the same story for the Bears and the Green Terror. Rose, Weger, and Bauman gave the team another commanding lead of 23-10 and just like that, Rose punched in the final two kills to take the final set by a score of 25-12, sweeping the Bears for their third win in a row.

The win brought McDaniel to 3-1 in the Centennial Conference, tied for third placed with Haverford, trailing both Swarthmore (15-3, 5-0) and Johns Hopkins (9-9, 5-1). The Green Terror will face Swarthmore on Oct. 17 and Haverford one week later, both at home, and Johns Hopkins on Oct. 28 on the road.