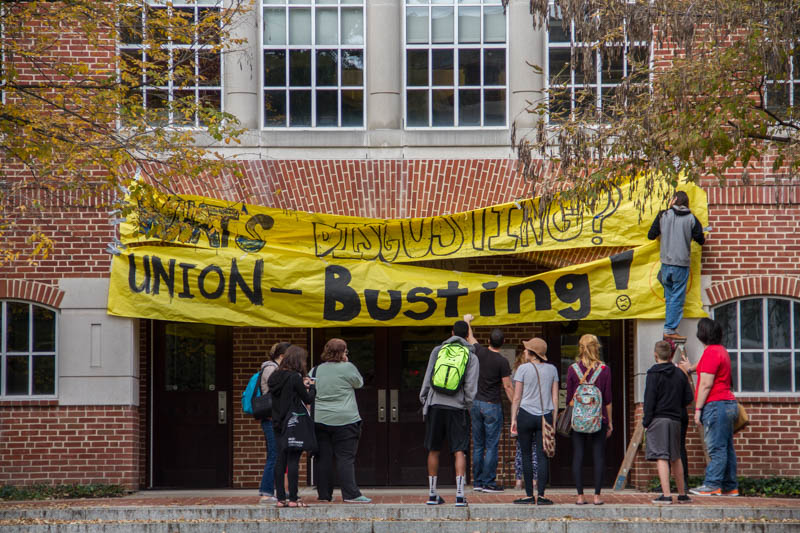 On October 9 at 11:30 AM, members of the Progressive Student Union hung a banner on the library and sought to deliver letters in protest regarding an email sent to faculty outlining the risks of unionizing.

Due to the discouraging tone of the email, the Progressive Student Union, upset by its contents, responded with a written letter criticizing the email and sought to deliver a written petition with over 400 signatures to administration calling on them to remain neutral. 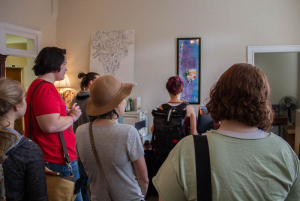 After learning of President Casey’s absence, students entered the Office of Academic Affairs in attempt to deliver items to Provost Julia Jasken. Photo by Kyle Parks.

The students first hung the banner directly above the entrance to Hoover Library then walked to President Casey’s office in an attempt to deliver the petition and written statement to him directly. While in this process, members hung and passed out copies of their written response. Upon their arrival, however, it was brought to the students’ attention that President Casey was traveling, causing them to move on to the Office of Academic Affairs to deliver the items to Provost Julia Jasken, who sent the email.

According to the secretary in the office, Jasken was in a meeting and was ‘booked solid’ for the day. The secretary left the room to check if Jasken would quickly see them, but she was unable to do so. The students of the Progressive Student Union, led by Caroline Unger, then decided to wait for the meeting to conclude, which the secretary claimed would take about 20 minutes.

During the period of waiting, strong winds blew down the banner on the library. Members then decided on an area in Red Square, just in front of the library, as the new location for the banner.

After approximately 35 minutes of waiting, Dean Towle appeared in the office to explain to the students that Jasken would not be able to meet with them. They still remained for a while, however, at around 12:40, many eventually left with intention of returning at 2 pm. 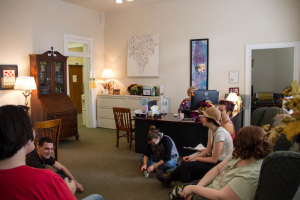 Students decided to wait for Jasken’s meeting to conclude. Photo by Kyle Parks.

It remains unknown what impacts this event will have on adjunct unionization and/or upon the college in general.

UPDATE: Members did in fact meet with Provost Julia Jasken when returning at 2 PM.