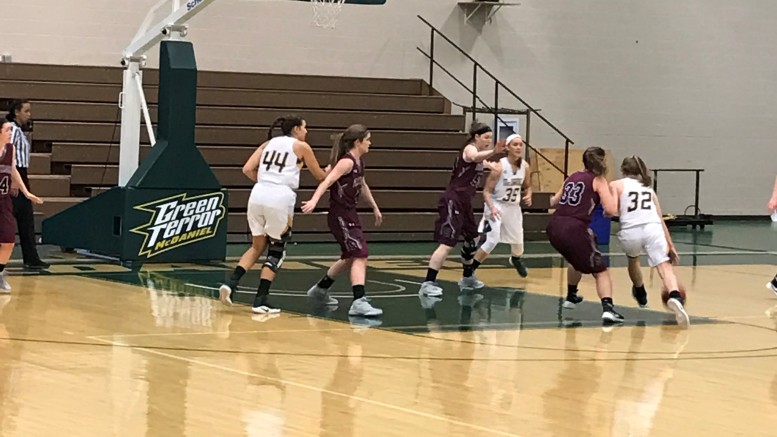 McDaniel's Liv Storer drives to the basketball in the Terror's 59-45 win over Swarthmore on Saturday, Feb. 4 at the Gill Center. Photo by Rebecca Olsen.

Green Terror women’s basketball faced off against the Swarthmore Garnet in a midday contest during the first freezing weekend of the month on Feb. 4 at the well-heated Gill Center. The Terror clinched a 59-45 victory over the Garnet thanks to a 13-0 run to start the game.

The first quarter started off a little rocky for McDaniel (11-10, 9-7) with a few missed shots and fouls called against them until they started picking up momentum after a Jasmine Smith free throw with almost two minutes down. Not 30 seconds later, Halle Burgess netted a three-point jump shot to make the game 5-0.Burgess was on as she made another jump shot less than a minute later to move the Terror’s lead to 7-0.

Swarthmore started the second quarter off with a band when they scored two points in the first seven seconds off a jump shot.

Burgess answered back with another three-point shot and teammate Alyssa March made a layup to move McDaniel’s lead to 20-12.

Over the middle minutes of the quarter, the Terror went on a nine point scoring spree with tallies from Melanie Yoemans, Live Storer, and again from March. The Garnet and Terror traded shots for the remainder of the half to head into the locker room with the hosts up 37-22.

The Green Terror kept the pressure on as the third quarter started with another Burgess three only 30 seconds in. With 6:41 left, March went on a free throw spree, adding for points in 30 seconds. Smith added six more for McDaniel after sitting out due to foul trouble for most of the first half.

Swarthmore added just seven points by the end of the third bringing McDaniel’s lead to 54-29 heading into the final quarter of the game.

Again, the Green Terror started off the quarter strong with another Burgess three. The Garnet fought back, forcing the Terror on defense for the first five minutes of the quarter. A Hannah Ravenscroft layup ended the streak, but the Garnet put up nine more points before the final buzzer sounded.

Despite the last-quarter efforts from Swarthmore, McDaniel earned the win, 59-45.

Success On and Off the Field at McDaniel College