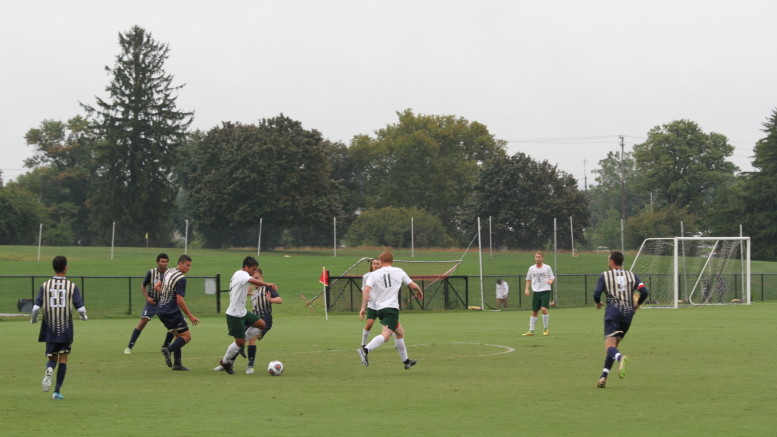 Raul Escobar (left) battles for the ball during McDaniel's 6-0 victory over Gallaudet on Wednesday. Photo by Atticus Rice.

In the midst of a heavy rain, Green Terror Men’s Soccer defended their home field for the first time this season and reigned victorious over the Gallaudet Bison 6-0 on Wednesday afternoon.

McDaniel (3-0) propelled themselves to a win streak, adding to their undefeated record this season.

Gallaudet (0-3) held their own for the first 25 minutes before McDaniel captain Raul Escobar netted the first goal for the hosts.

Leading the Green Terror on offense with two goals each was Escobar and Jacob Wells. With one goal each, Billy Rodgers and Jonathan Horrocks left their impact on the game as well. The Green Terror fired 13 shots on goal throughout the game with 7 being followed by corner kicks in attempt to take the lead as early as possible.

“Early on, we were looking to score,” said Escobar.

The barrage of shots from the Green Terror proved to be too much for Gallaudet goalkeeper Noah Means-Simonsen who ultimately would have seven saves. In retaliation, Connor Baer, Sean Huber, and Elan Markel would have one shot each with only one corner following on offense.

Teamwork made three of the six goals possible as Wells assisted a goal in addition to scoring two of his own. Two other goals were assisted by Pat Palin and Dominic Byerly.

Despite scoring six goals tonight, the team looks to improve and capitalize on their performance.

“Any time you score goals, it’s a confidence booster,” Head Coach Steve Corrieri said. “We are under no illusion, we need to be getting better every day starting tomorrow.”

With a strong performance tonight the men’s soccer team finds motivation in victory as they prepare to face Albright (1-2) away on Sept. 13 at 7 p.m. and to extend their win streak.

“[We are] very motivated,” Escobar said. “I think we are strong at every position so once conference play comes, which will be difficult we will be ready to go, in the meantime we just got to take care of Albright.”