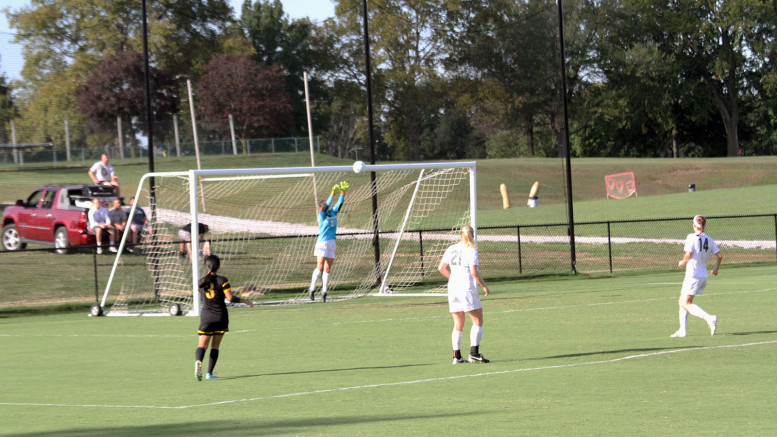 McDaniel goalie Sarah McDonald makes a leaping save in the second half of the 4-0 win on Saturday. Photo courtesy of Maia Hanlon.

Green Terror Women’s Soccer came out firing on Saturday, beating the Bryn Mawr Owls by a score of 4-0 at the Green Terror Soccer Complex.

McDaniel (7-0, 1-0) jumped out to an early lead, scoring in the third minute of the game thanks to a one-touch shot from Abby Keen, assisted by a Nicole Hill throw in.

17 minutes following Keen’s goal, the midfielder paid it forward, assisting Kristen Upton who made it 2-0 in favor of the Terror with her own goal.

The score remained 2-0 entering the break.

Not even 10 minutes into the second, half Keen came to the aid again, this time to assist Katie Clawson who scored to make it 3-0.

The first-year’s goal was her first of the season and from any of the players in her class, something that Head Coach Sandy Lagana was very proud of after the game.

“We got our first freshman goal,” said Lagana with a smile, “The girls are playing really well, supporting each other.”

Keen led the field with her two assists, in addition to her one goal.

Green Terror goalie Sarah McDonald saved both shots on goal made by the Owls.

McDaniel outplayed Bryn Mawr 20-3 on shots, 10-3 on shots on goal, and 7-0 on corners. Both teams were given five fouls each.

Lagana was optimistic for the remainder of the season after the win, talking of what she expects from her team this year.

“The end goal, I feel like at this point, is to make it to the Championship Game and make the NCAA Tournament,” said Lagana.