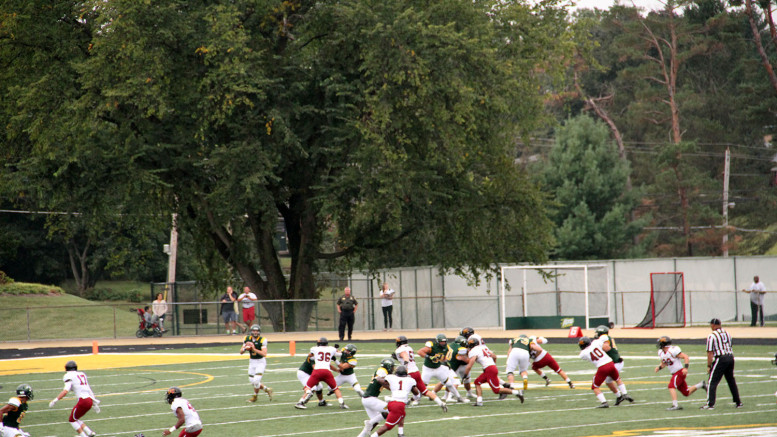 McDaniel's Will Koester looks for a lane in the Terror's first win since 2014. Image courtesy of Maia Hanlon.

Green Terror Football won their first game since September 5, 2014 on Saturday, defeating the Ursinus Bears in Centennial Conference action at the Gill Stadium by a score of 30-27.

McDaniel (1-3, 1-2) scored the winning field goal as the clock expired, capping off a 34 second drive that started with the game tied 27-27.

Green Terror quarterback Will Koester completed a pass to Bamasa Bailor for 15 yards on a 4th and 12 attempt, placing the Terror at the Ursinus 26. A one-yard rush by Perry Stefanelli set up the field goal attempt from the 43-yard line for kicker Spencer Wiersberg.

Wiersberg hit the field goal, curving left, to seal the win for the Terror in front of 4,316.

McDaniel drew first, scoring a touchdown after just 42 seconds in the first quarter. 10 minutes later they added to their lead with a field goal, giving them a 10-0 edge.

Ursinus (0-4, 0-3) came responded with a 94-yard kickoff return from Jonathan Gerhartz that ended with a touchdown for the Bears.

McDaniel would hold the lead until the start of the second half when Ursinus took a 24-17 lead from a Nicholas Ford field goal.

Ursinus would hold onto their lead until McDaniel tied the game with one minute to play in the fourth quarter. The 67-yard drive was capped off by Koester’s pass to Breon Herbert, followed by a successful extra point attempt from Wiersberg.

60 seconds later, Wiersberg came back on the field to win the game for the Terror in appropriate fashion.

Coming out with a 44 percent third down efficiency, McDaniel was able to convert on all four of their fourth down attempts, all at key times.

The Bears saw 35 and 50 percent numbers, respectively, in both those categories.

Wiersberg hit all three of his three field goal attempts for one of the more successful games in his career.

Women’s Soccer Bears Down in Win Over Ursinus