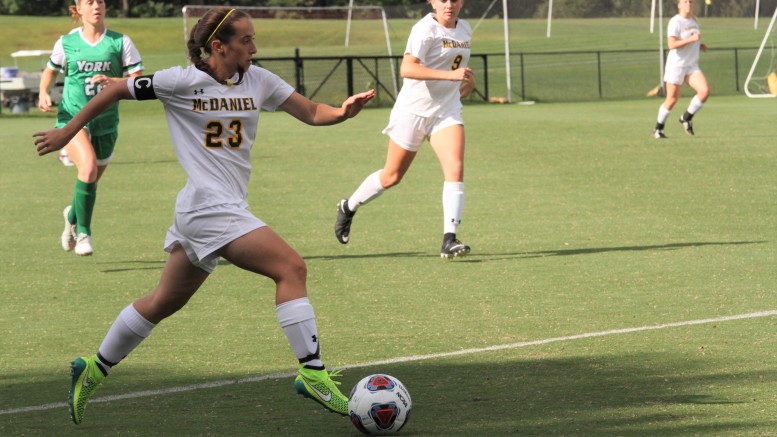 Captain Katie Kirschenmann drives down the field in McDaniel's 3-0 shutout of York (Pa.) on Wednesday evening.

McDaniel (2-1) jumped ahead when Katie Kirschenmann found the back of the net just seven minutes in. The senior’s first goal of the season was assisted by fellow senior Paola Rosa.

The Spartans (0-3) had their best chance to score on a Caitlin Rankin corner in the 22nd minute which fizzled in the McDaniel defense.

Another three minutes would pass before the hosts tacked on their third and final goal thanks to a Maddie Schwartz goal. The freshman’s first goal came from an Abby Keen corner with the assist by Marissa Funke.

“Any time you finish three-nothing it’s a great game,” said Head Coach Sandy Lagana. “It means you were productive offensively and got the shutout and we got to play every player, all the field players, and everybody got to contribute which is exciting too since this weekend was so competitive,” she continued, referencing the team’s 1-1 record following their play in the Salisbury University Classic.

McDaniel’s second win of the year starts a season that follows their bid to the 2016 NCAA Tournament where they advanced out of regional play to the second round.

Nearly a quarter of the Terror’s goal scoring from last season has graduated from the team, but the majority of their starting defense has returned along with Kirschenmann, the team’s leading scorer last year.

“It’s really great,” said Lagana, speaking about the team’s leadership. “We have five seniors and I feel like they really are that leadership group for us. The juniors are really fantastic too. We look at leadership not just in captains but who can help and I think, to be honest, even our sophomores are leaders too.”

Kirschenmann led the field with four shots, two on goal, closely followed by three both from Titus and Schwartz.

The hosts put up 16 shots to York’s two.

On defense, senior captain Kristen Upton held the line for the Terror and contributed one shot of her own.

Behind her, senior goalkeeper and nearly four-year starter Sarah McDonald had little work to do with no shots on goal from the Spartans.

Maxine Herman and Rankin came the closest with a shot each from the York offense.

“Tomorrow we just work on some of the things that I thought we could have executed better on today,” said Lagana, “and then I think on Saturday if we jump out the way that we did today then I think if we play like that we’ll get another win.”

McDaniel returns to action Saturday to face Alrbight (1-2) at 2:30 p.m. in Westminster.

“I’m pleased with where we’re at,” said Lagana of the team’s early season progress. “I think we have a long ways to go but the girls are working hard every day and I’m excited that we get to turn around and play again on Saturday.”