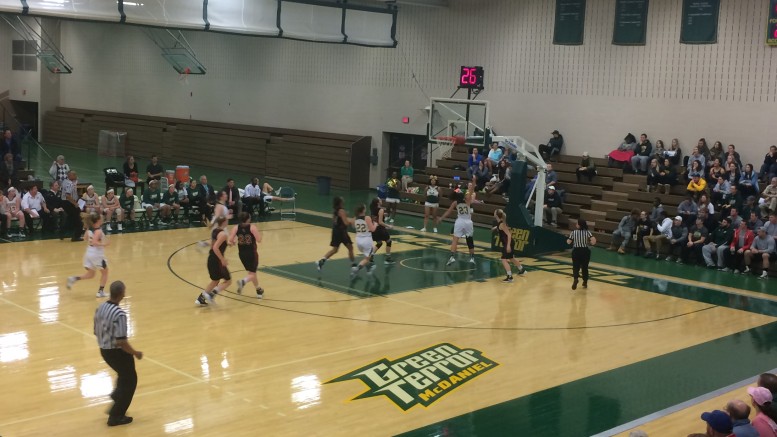 The Green Terror women begin look to tie the game during their comeback against the Ursinus Bears.

The Comeback Kids were at it again on Saturday as the Green Terror women’s basketball squad beat the Ursinus Bears 71-62, their third comeback in as many wins.

The win was highlighted by a 20-1 run that started near the end of the third quarter and extended well into the fourth.

Freshman Halle Burgess came off the bench for the Terror (17-4, 12-2) and scored 15 points, shooting 6-for-7 on field goals, including three 3s, heavily contributing to her team’s strong finish.

Lindsey Nichols led the Terror in scoring with 21 points, hitting 8-of-19 field goals with three 3s.

The Bears (10-10, 8-5) got off to a strong start, fueled by three baskets from Alyssa Polimeni in the first two minutes.

Strong play from Nichols and Karli Zeps ended the first quarter with McDaniel up 13-12.

The Bears took off in the second quarter, sending the Terror to the locker room down 30-21 at the half.

After Zeps left the game due to injury, Burgess took over, helping Nichols bring McDaniel back into the game.

The third quarter ended on a Burgess buzzer-beating three to bring McDaniel within four. Their scoring streak continued to pull off the win.

Early in the fourth, a Nichols layup tied the game at 47.

A layup and free throw from Brittney Davis gave McDaniel its lead that would not be lost.

Davis added 14 points of her own, shooting 4-for-8 on field goals and 6-for-7 from the free-throw line.

McDaniel closed out the game with two Sarah Bach free throws with 14 seconds left to seal the win.

The Green Terror men had a similar story to tell, defeating the Bears 65-64 in the final 15 seconds of the game, keeping their playoff hopes alive.

The game ended in dramatic fashion. Down 64-52 at the 4:33 mark after the Bears drained three consecutive 3s, a 13-0 McDaniel run gave the Terror the win in the final minutes of the game.

Down 64-60, McDaniel’s Josh McWilliams sunk a three as he drew a foul, sending him to the line for the game-tying shot. Although he missed, the rebound was knocked out of bounds off Ursinus, giving the Green Terror (10-10, 7-7) their final chance with 23 seconds left.

Senior Wes Brooks received the ball inside the three-point line and put up his jump shot for the win, but missed. He netted the putback, giving the Terror the 65-64 lead.

The game got off to a back-and-forth start with both teams building five point leads throughout the first half. Comebacks on both sides of the court sent the teams to the locker rooms at the break with Ursinus up 39-35.

Ursinus then drained three pointers, leaving McDaniel to fight its way back.

Rightfully, Brooks led the Green Terror with 21 points, shooting 9-12 on field goals. Teammate Tim Stewart added 19 of his own shooting 9-21.

The Bears were led by Malik Draper’s 20 points, shooting 8-for-15 on field goals with three 3s.

Both teams will take the court on Wednesday, Feb. 10 for a home doubleheader against Johns Hopkins.  The women tip off at 6 p.m., followed by the men at 8 p.m.