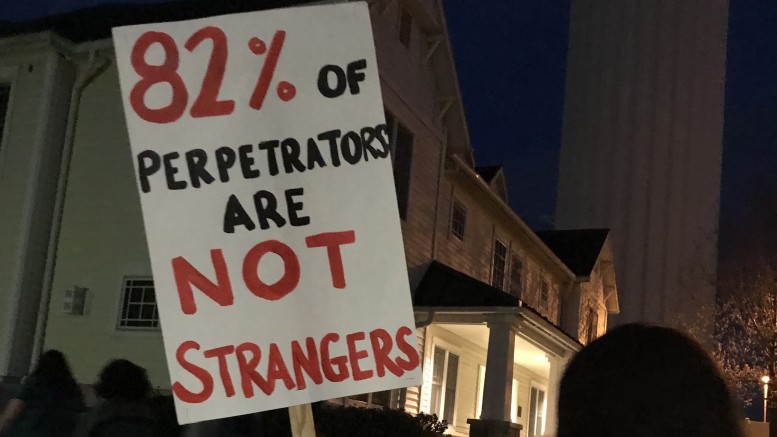 The 2018 Take Back the Night walk was a first for McDaniel, but CASE members assure it--and others like it--won't be the last. (Photo courtesy of Mackenzie Hunt).

For the second year in a row, the McDaniel community will hear the stories of survivors of sexual violence and take back the night with hundreds of other colleges and universities in more than 30 countries.

McDaniel’s Take Back the Night Walk, to take place on Thursday, April 11, at 7:30 p.m. in Red Square, is sponsored by Consent and Sex Education, or CASE, which also celebrated its first full year of action last month.

The purpose of the event is to empower survivors of sexual violence at McDaniel, Hunt said.

Members of CASE will be sharing anonymous stories of survivors at 8 p.m. Thursday before attendees begin their walk across campus.

“During the walk, we’ll be chanting and holding signs to draw attention to our case,” said Hunt.

The walk will end in Gill Gymnasium with a vocal performance and some community building.

CASE is working with Rape Crisis Intervention Services, the Wellness Center, and an entire supporting network on the Hill, Hunt said.

“We really appreciate how much support we receive from McDaniel faculty and staff,” Hunt said.

“We had never met,” Hunt said, “but we shared a common passion.”

That passion was something they evidently communicated to Orzolek-Kronner, Hunt said.

“I had been interested in starting something up to try and help educate around sexual assault at McDaniel since I arrived,” said Gunnerson. “I discussed this with Dr. OK [sic] and she connected me with [Schneider] and [Hunt], who had both said they were particularly passionate about this topic. Together, the three of us figured our how we wanted CASE to look.”

“I knew that the three of us were dedicated to fighting sexual assault and determined to end it here at McDaniel,” Hunt said of their first meeting.

“That is unacceptable,” Hunt said of data surrounding sexual assault in college, “and as a society and a college we can and must do better.”

The three founders wanted survivors to be able to share their stories and fight for change, Hunt said.

“We believe there should not be a stigma surrounding topics like sex, sexual assault, and consent because they are so incredibly important to discuss,” she said.

Gunnerson has been able to use CASE to highlight prevention education.

“I take so much issue with the way America’s sex education system is set up,” said Gunnerson, “and I think that by college so many people have received so much misinformation. I think everyone deserves to know the truth about how to have a healthy sex life, and I–and other lovely members of CASE–would love to help play a part in that.”

Last year, about 60 students attended the walk, a number that the organizers were incredibly happy with and proud of, given their time constraints.

“We put together [Take Back the Night] in under a month last year, so to be honest I would have been ecstatic if five people came,” said Hunt.

One of the differences between the first and second walks is the format in which survivors’ stories will be shared.

“Last year,” said Hunt, “we had survivors share their stories with the audience and that was one of the most powerful things I have ever had the privilege of watching.”

For the second walk, CASE members will be sharing the stories to allow more to be anonymously heard.

“The night was a whirlwind of emotions, but we all left feeling strong and united,” said Hunt. “I refer to it as an ‘activist high’ because afterwards my adrenaline was pumping and I was so proud of everyone who came and supported survivors.”

Chasing this “high” has been more coordinated and organized since the founding of CASE.

The group was able to hold a sexual assault awareness week last April where they held events to talk about consent, gave tips on helping survivors of sexual assault, and presented resources for survivors.

CASE has also held events about STDs, birth control, and healthy relationships. In February, they collected encouraging notes from the campus community and delivered them to individuals at RCIS.

“That night,” said Hunt of last year’s walk, “was hands down the highlight of my first year at McDaniel.”