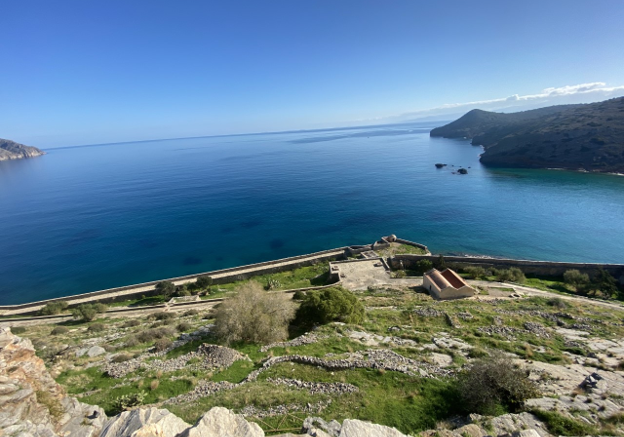 Although most students and faculty are fully vaccinated and boosted, the pandemic still prevents students from gaining whole experiences. Professor Tom Falkner’s January Term, IDS 1156- Greece: Myths, Monks, and Monuments, was shortened due to several students catching the virus.

Students, whose years varied, traveled to Greece in Jan. 2022. They stayed in Athens and the islands of Crete and Aegina. In a recent interview, Falkner described the program as immersive and an intensive introduction to Greek culture.

“Students visit monuments, museums, monasteries, and archeological sites across the country, study Greek culture from past to present, and experience the culture of contemporary Greece–its politics, social life, music, and food,” he said.

Junior Rory Sullivan and his friends joined the program in hopes of traveling–something they love to do. They were not disappointed with the experience they had.

“Before everything went downhill, everything was really–well–nicely [run]… I really had a good time. I’m glad we were able to be on our feet for the most part,” Sullivan said.

The program ended two-thirds of the way in due to five out of the 25 students testing positive for COVID-19. All five of them had received their booster shot.

“Obviously, I really wanted to do that. But at the same time–you know–everything hit the fan, and I didn’t think it was safe to do any of that anymore,” said  Sullivan.

The cause for these cases is currently unknown.

Students left Greece in three groups. Six concerned students arranged flights back to the U.S. on their own the morning after the tests. Some of these students were assisted by the program’s travel agents and parents.

One day later, the program was officially terminated, and the remainder of the students who tested negative departed. Travel agents and the McDaniel administration successfully assisted them in getting the other fourteen students plane tickets on short notice.

Sullivan was a part of the second group.

“At first, I was sort of convinced that we were on our own. And that we had to be financially responsible for paying for the flight back, paying for everything–cab, everything. But thankfully, Brooke [Hain] and Erin [Benevento] stepped in,” he said.

Sullivan, thinking he was on his own, initially called the two airlines they flew on but did not find them helpful. He said the process was very stressful at first but was grateful for the college stepping in. He and his thirteen other classmates had to wake up at 2:30 a.m. and leave the hotel thirty minutes later to catch their 7 a.m. flight.

The last group included  Falkner and those that tested positive. They were quarantined in Athens for the next five days, as required by Greek authorities. They were told to stay in fully furnished apartments arranged by the Athens Centre. Falkner frequently contacted the quarantined students and stated they handled it well. None of the students had severe illness. According to one student, the concern was if they would make it back for the spring semester in time. They returned on Jan. 18, the date the program was initially supposed to end.