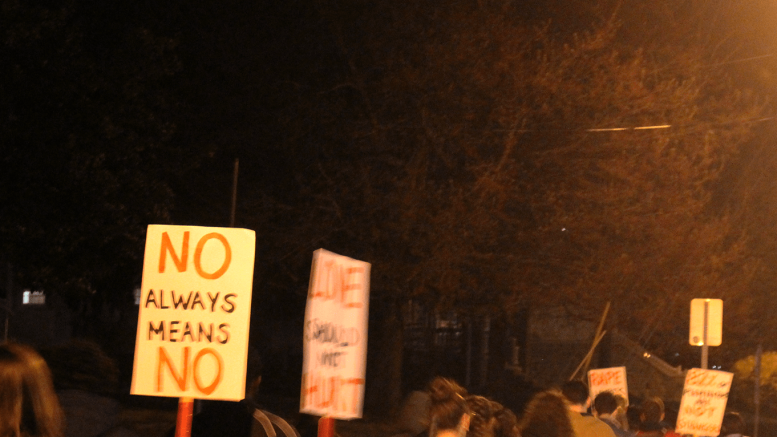 More than 40 students and community members gathered in Red Square at 7:30 p.m. on Thursday, April 11, 2019 for the College’s second annual Take Back the Night walk.

The walk was organized and hosted by Consent and Sexual Education, a student group formed just last year by current sophomores Mackenzie Hunt and Rachel Gunnerson and junior Ariana Schneider.

“You are here to have your voices heard,” said Hunt in her opening address. “Our society and our campus allows rapists to walk free and they blame victims. Tonight we are here to challenge those beliefs and change our culture. We are here to take back the night.”

Members of CASE opened the event by reading aloud stories that the McDaniel community had anonymously shared with them beforehand.

“We want to thank everybody who courageously shared their narratives with us,” said Hunt. “Thank you for your strength and bravery. We know that we cannot give your stories justice that they deserve since we have not experienced them ourselves, but we felt that it was necessary to make your voices heard. We hear you, we love you, we believe you.”

In an email before the event, Hunt referenced an “activist high” she felt after a successful walk last year. This year was no different.

“Yes,” she said ecstatically of her high this year. “Love it. My voice is shot, as per usual, but it was tons of fun.”

Led by Hunt and other CASE members, students briskly walked from Red Square to Klitzberg Pavilion while shouting a mix of chants prepared and passed out.

“It was awesome that a lot of people just took initiative when we were walking around chanting,” said Hunt. “My voice–I couldn’t do it–but people would do it and make up their own.”

The route took participants past the fountain and through the circle by McDaniel Hall before turning at Peterson Hall to eventually pass by Conference Services and walk north on Pennsylvania Ave. Officers from Campus Safety helped keep walkers safe from vehicle traffic as they turned from the sidewalk back onto campus through North Village and eventually into Klitzberg from the entrance near the water tower.

Once inside, people mingled and discussed their actions before a performance of Til It Happens To You sung by first-year Rhema Jones.

Hunt closed the night out by thanking everyone for their participation and togetherness.

“It was great,” she said, “because last year it was kind of hard to get people out, but I think it was cool that people were [in Red Square] when I showed up, which is really amazing.”

Given the nature of and emotions surrounding Take Back the Night, members from the Rape Crisis Intervention Service of Carroll County and Director of the Wellness Center Heidi Huber took part in the walk and surrounding events to counsel anyone in need.

CASE was founded in part by the efforts of Cathy Orzolek-Kronner, a social work professor who all three founders had classes with.

“All of their passion on these topics was insurmountable,” said Orzolek-Kronner. “At this same time, I was working closely with the college’s Title IX committee, and realized that we as a community needed more awareness and  education around consent, healthy masculinity, and the reality of sexual assault. While the Wellness Center, First Year Team, and Athletic Department offers programming on these topics, it was simply not enough according to these students. In addition, the Title IX team was looking for more ways to bring about greater understanding and illumination to these very important issues.  I thought about the passion of these three young women and  suggested that perhaps we could create an avenue for them to advocate and educate for a common cause. We set up a meeting to discuss ideas and the synergy was overwhelming.”

It was at this point last year that members from RCIS became involved with the group. With this far-reaching support, CASE has been able to make a relatively large impact in a short amount of time.

“It is remarkable how many students have gravitated towards this group,” said Ozorlek-Kronner. “It is also noteworthy that this group is new to campus as of last spring and two of the founders are studying abroad this semester, leaving the Take Back the Night event under the sole leadership of Mackenzie [Hunt], who I understand is bringing together quite an inspirational event.”

Despite the successful event, the work of CASE is far from over.

“CASE has grown to fill the void where administrative support and resources should be,” said Schneider in an email preceding the walk. “There is not enough education on the McDaniel campus regarding issues such as consent, STIs, and sexual assault. Along with this, when sexual assault happens on campus, students are not given information they are entitled to and are sometimes pressured to act in ways outside of their best interest. It is so important that survivors of sexual assault are supported and allowed to proceed in a manner they determine that helps their healing.”

Editor’s note: Those who have experienced any form of sexual violence should contact local resources like the McDaniel College Wellness Center and RCIS or national resources like RAINN or NSVRC.

Commissioner Robin Frazier to be held in contempt of court